Happy Friday everyone! If you have been following along, you are likely wondering what the heck is going on with the bathroom? Because according to my original wish list, we should have been done by now. That was probably, ok definitely, a bit ambitious. Well, like with all renovations, we hit a few minor delays and we went on vacation 🙂 which had been on the books for sometime. So where are we now? This is the current view of the bathroom. 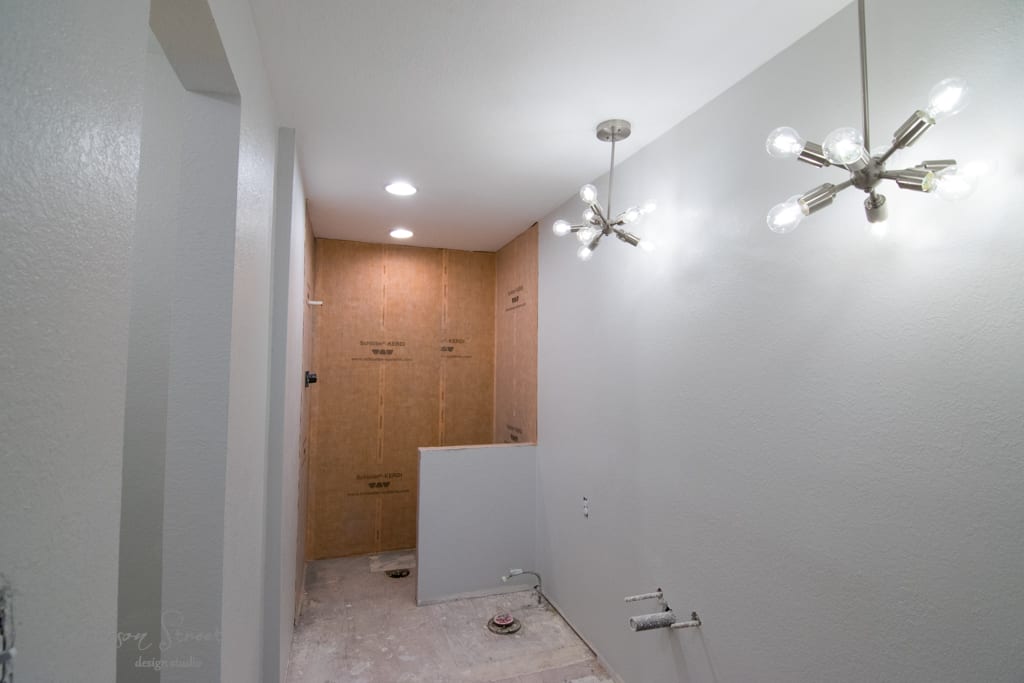 The last time we talked about the reno we were going to jump into water proofing the shower the following weekend. Well we did that, but we also decided to re-do the shower backer board. Seems silly right? But the way it was hung was going to make the next steps challenging, so we invested the time and re-did it. This cost us about a day. This is what the backer board looked like before. See all the seams, and how wide they are? 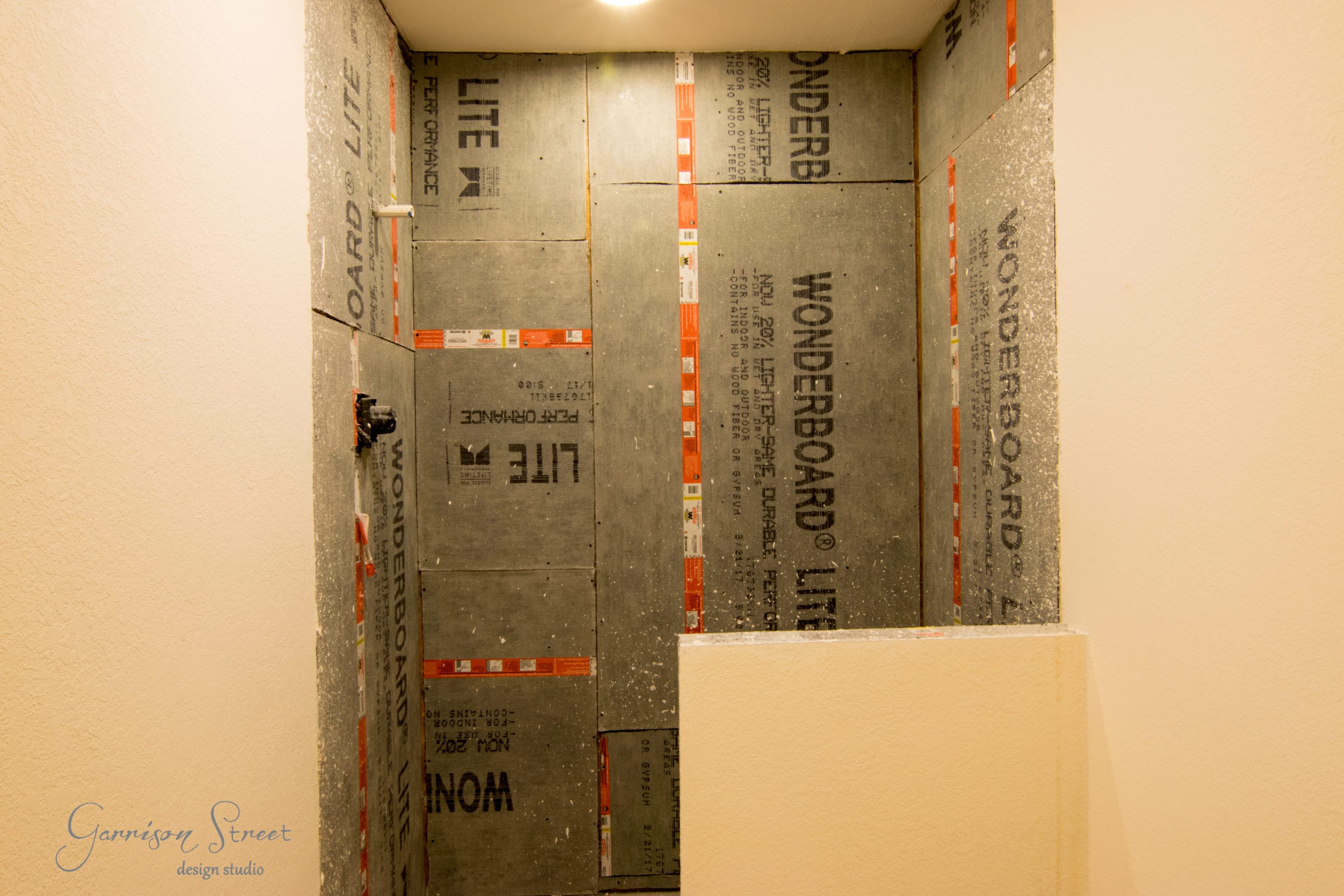 After we re-did it, it was much cleaner which will give us a better foundation for our tile. 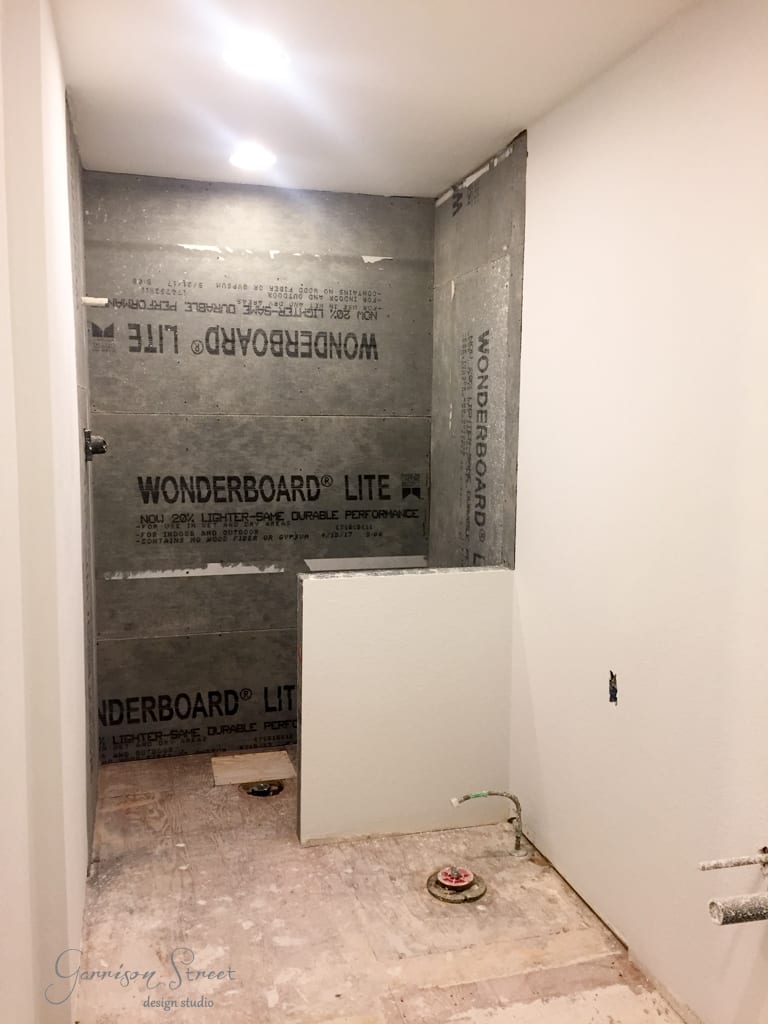 Then we did actually start the water proofing. Notice how I said start? See that’s where the delay came in. We spent a good half day hanging the waterproof membrane in the shower. 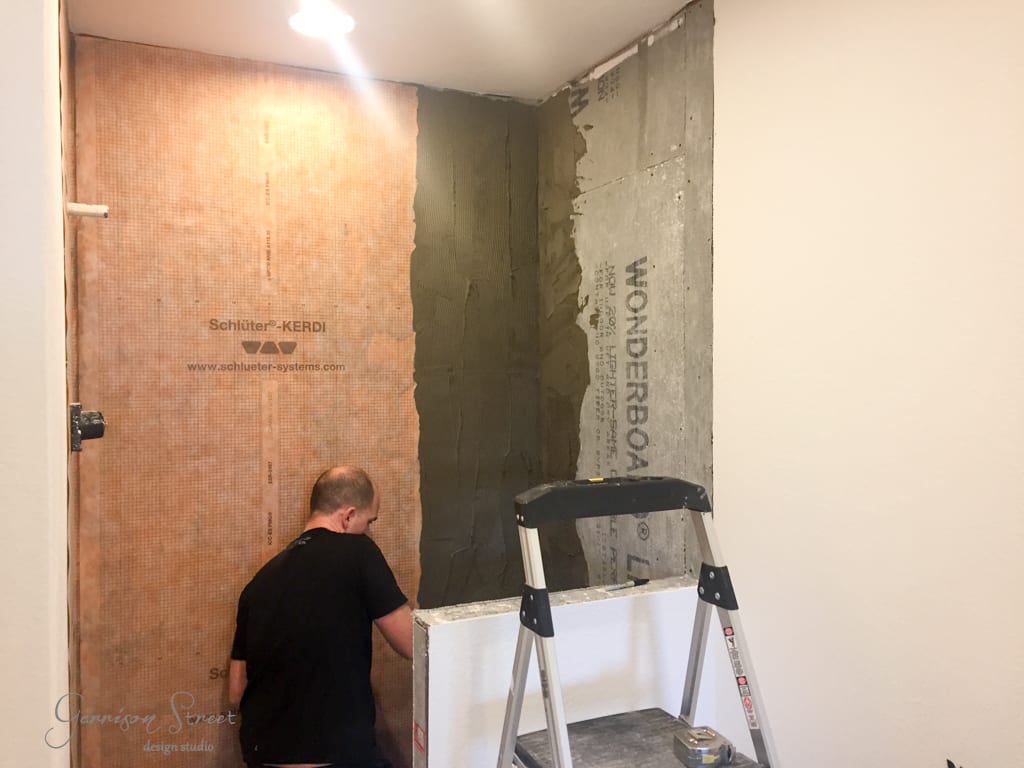 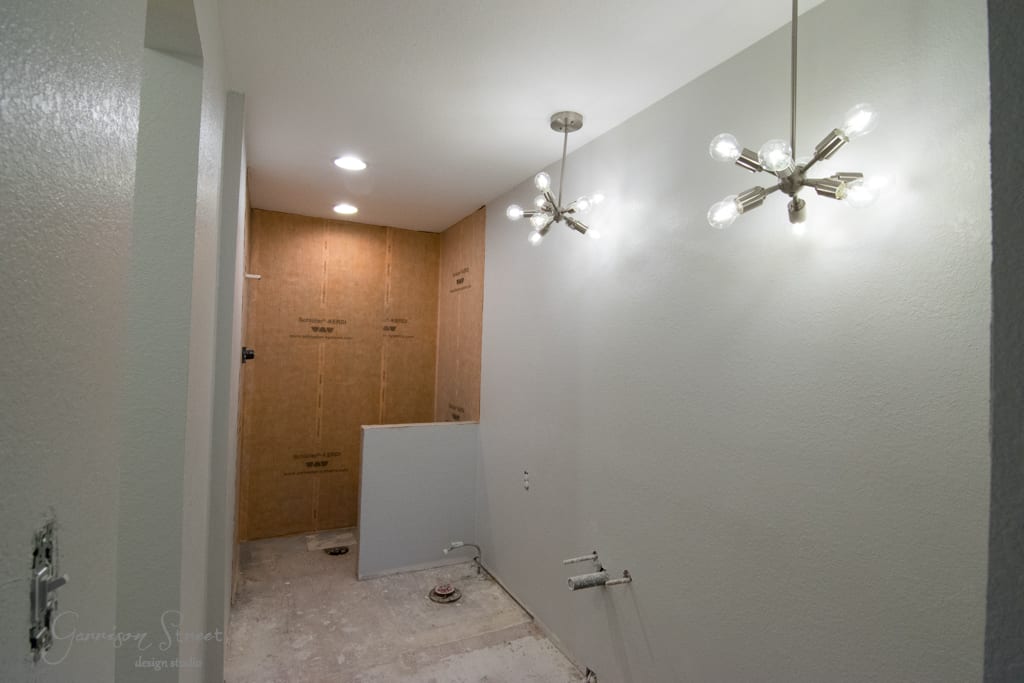 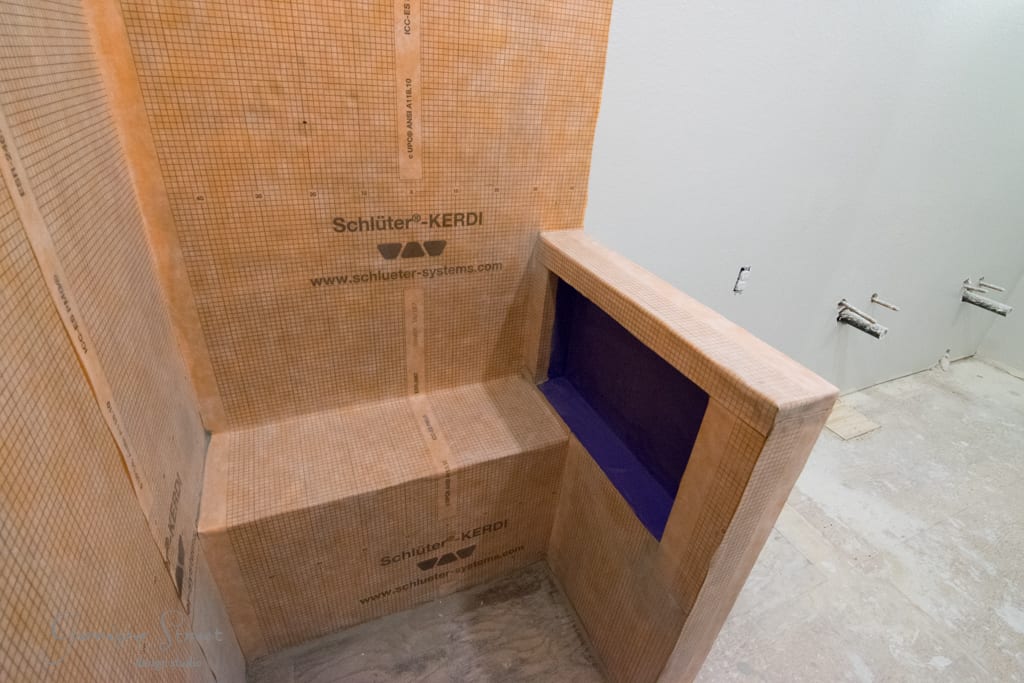 When we finished the walls we planned to move onto the floor so we could actually lay some tile, but we realized we ordered the wrong drain kit! We have ABS pipes and the drain kit we ordered was for PVC pipes. Whooooops! So we called our plumber to see if we could use an adapter and connect the two without reordering. He advised against it. Which meant we needed to order a new one. The problem was this drain kit is not stocked at any of our local stores and was not available on Amazon. This took about two weeks to get and then we were on vacation. So in the meantime, we worked on other tasks to keep moving forward on the project and checking items off the to do list. 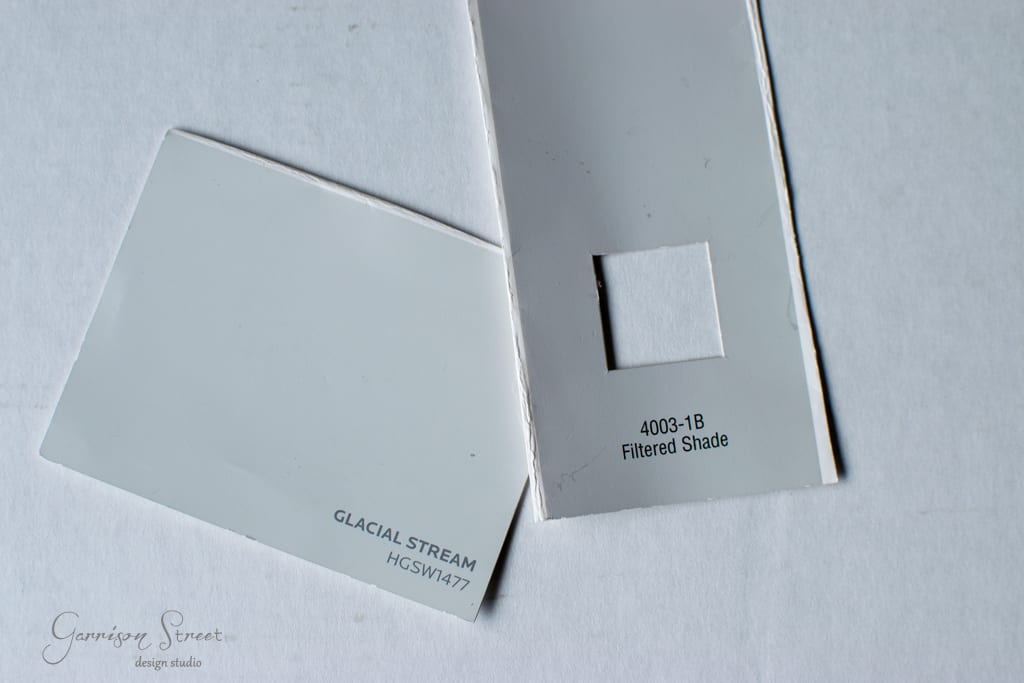 We also hung the sputnik lights in the bathroom. I love these SO MUCH!!! And yes, I know they are hung at different heights. I wasn’t sure what height I would like the most so I did one of each. I am still mulling it over. But check out how much brighter the bathroom is now! I totally love it! They are on a dimmer though so we don’t have to have it on max brightness all the time. 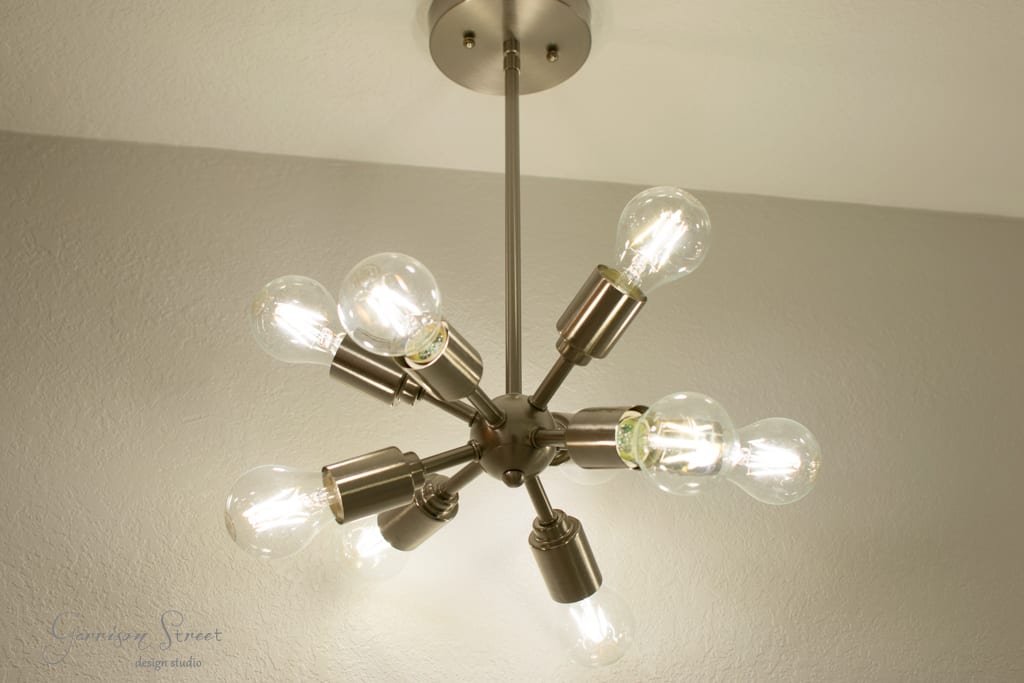 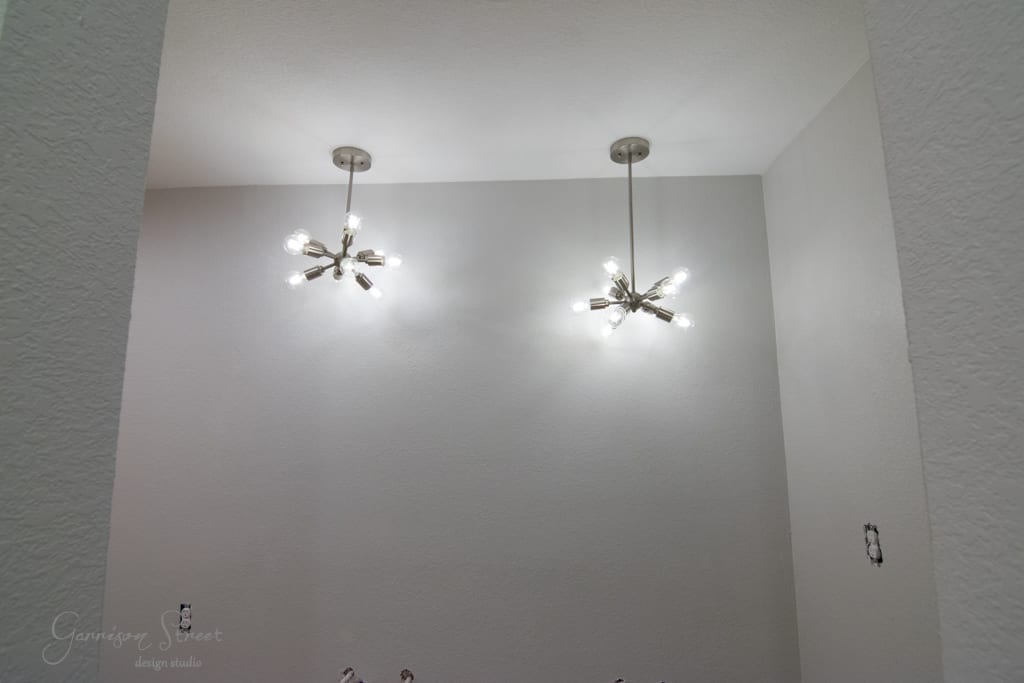 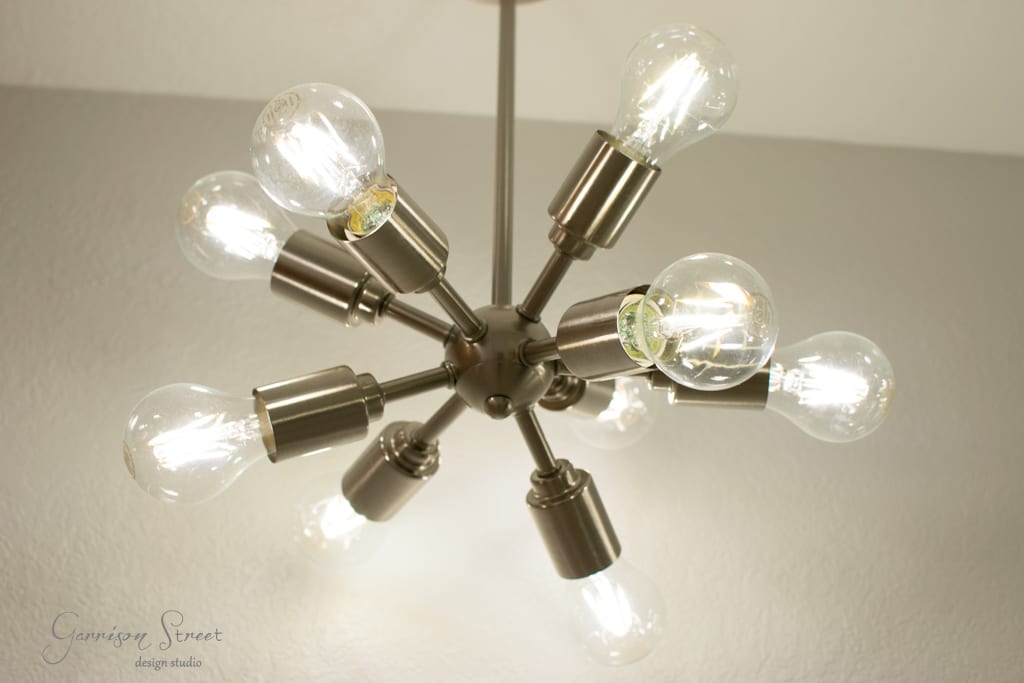 Disclaimer, we had to swap out the “original” Edison bulbs with LED bulbs that are smaller. A) The incandescent Edison bulbs are CRAZY HOT! And there are 18 bulbs in total, so a few minutes of those babies on and the temp in the bathroom raised like 5 degrees. Can’t have that. B) The original bulbs are also about 5 inches long and hit the wall in several places. This not only looked ridiculous, but was a fire hazard with the heat those puppies give off! These are the bulbs we used instead. 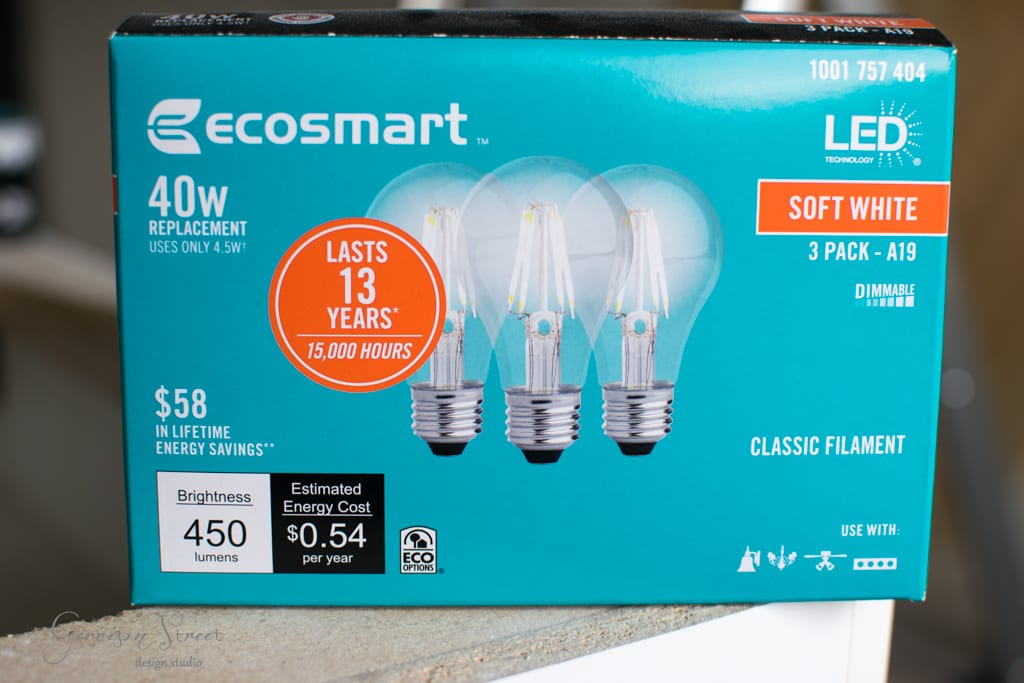 While waiting for our drain we also hung a new fan in the bedroom which is lower profile than our original fan and a bit more modern. It has the slide in blades like our new fan in the family room, adding to the sleek, modern vibe. 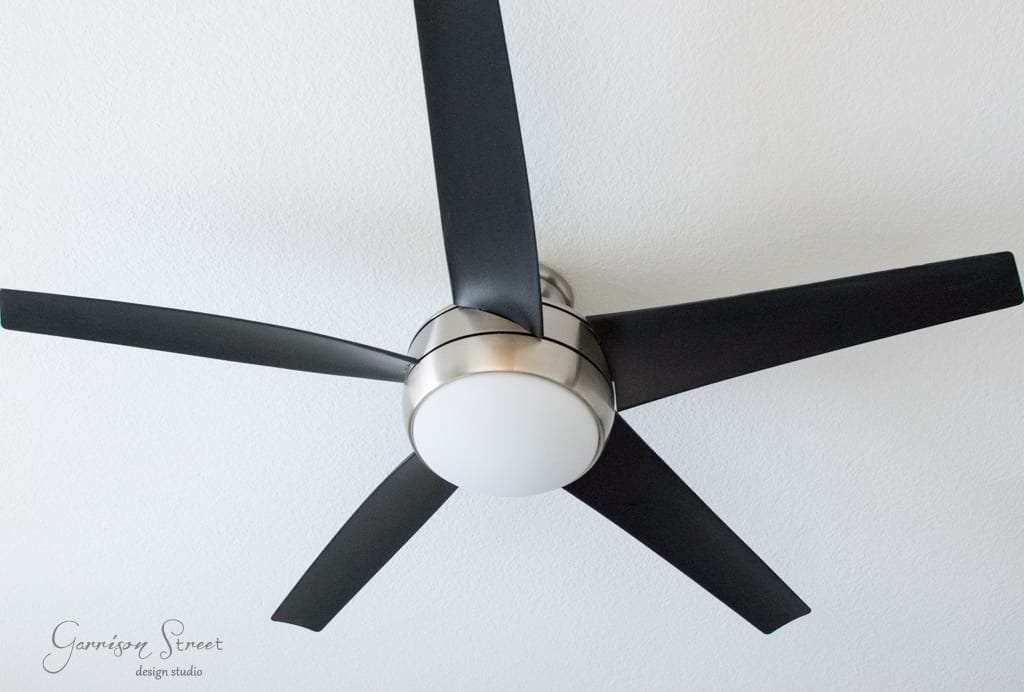 I also spray painted our swamp cooler vent on the ceiling. This thing was super dirty, a little rusty and flat out nasty before. I always wanted to clean it up, but didn’t see the point when the popcorn ceiling was just as dirty. 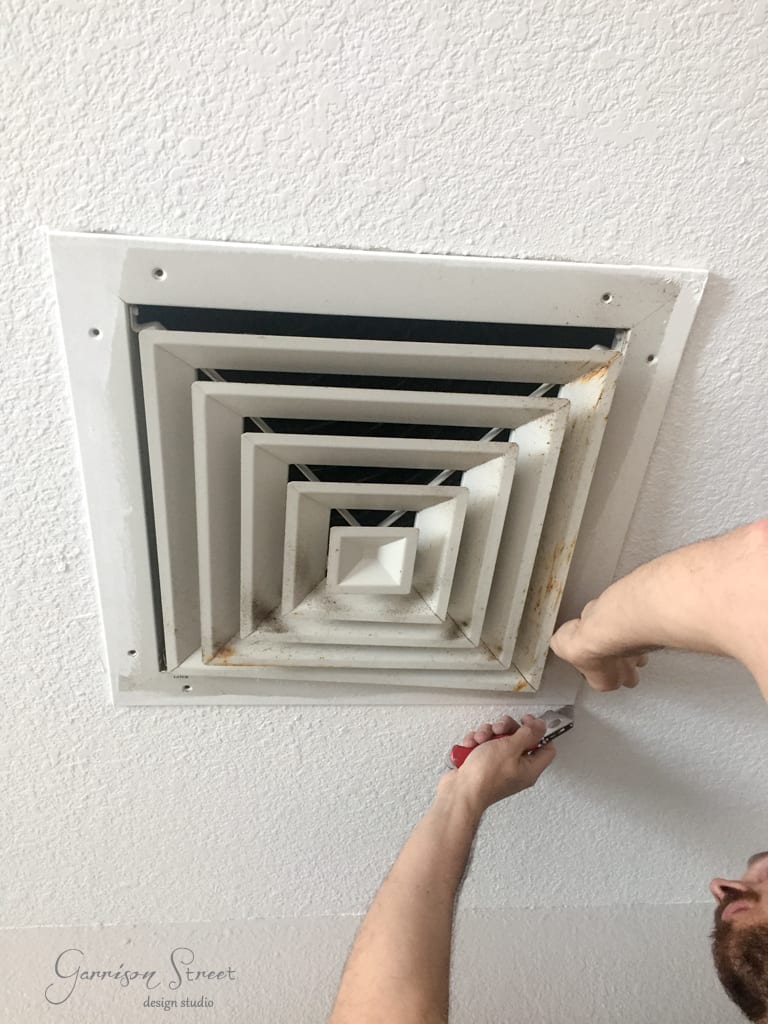 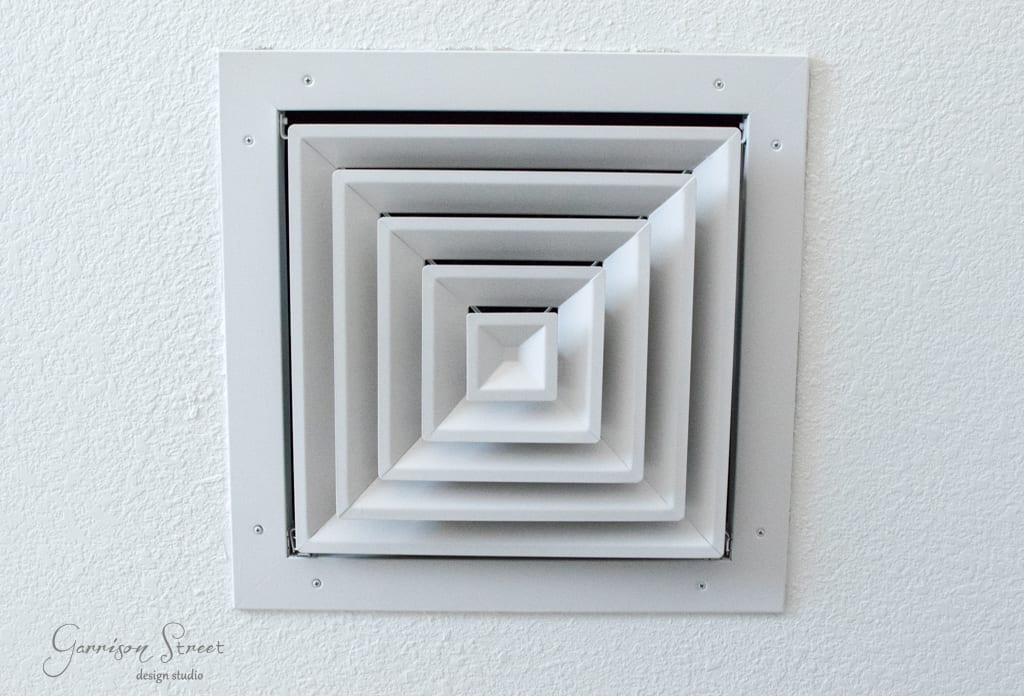 And finally we started an accent wall in the bedroom on the wall where the bed goes. I am LOVING it but I am not going to show you till its done! Ahhhhhh the suspense! I’ll give you a clue, it involves shiplap 🙂

Want to see some of our vacation pictures? Check me out over on Instagram and Facebook for photos not published on the blog! And to see my inspiration for upcoming projects, follow me on Pinterest.

wpDiscuz
0
0
Would love your thoughts, please comment.x
()
x
| Reply
By using this site you have read and agree to our privacy policies. Privacy policyAgree