As we began our family room flooring project, we encountered a few set backs which caused us to question if we should scrape our popcorn ceilings while we were at it. I mean the room was empty and the flooring had not been laid yet, so it made sense to do it, right? 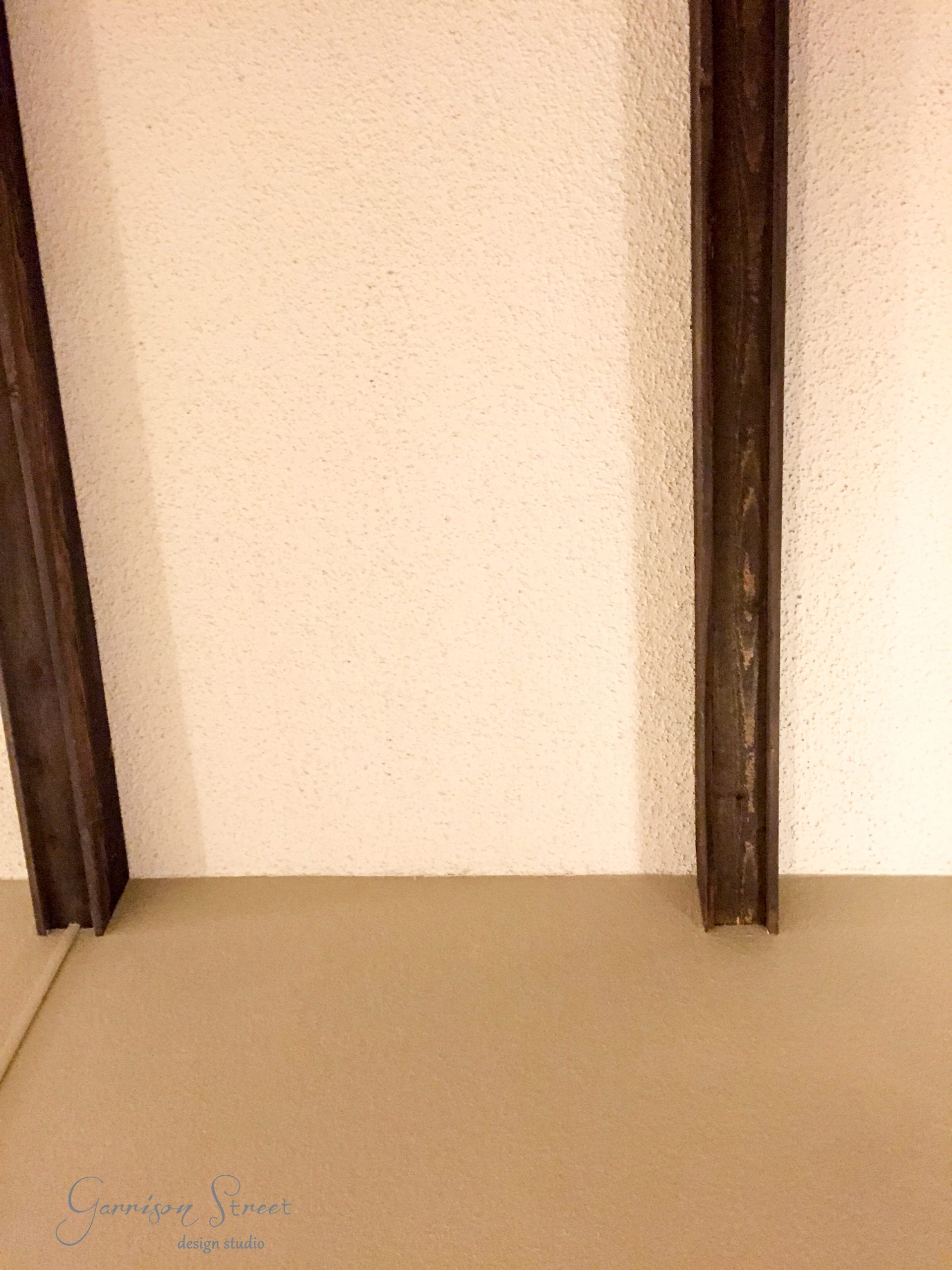 I wanted to scrape them ourselves. Barry wanted to pay someone to do it. So we did some good old fashioned research on YouTube. The things you can learn on there are endless! I mean seriously, what did we do before the internet? Do you remember? I do, but barely. I had Encyclopedias that some college kid sold door to door in the 80s. And of course my parents wanted me to be smart, so they bought them. If only they knew what was coming. Anyway, I digress. After watching many videos on popcorn ceiling scraping, I was convinced this was totally something we could do on our own. The only difference between our rooms and the ones on YouTube were the ceiling height. At the highest point, our vaulted ceilings are 15 feet…….Obviously we would need a taller ladder!

We have a 6 ft. “A” frame ladder but that wasn’t going to cut it. We also have one of those “magic ladders” that folds a bunch of ways but its’ max height is 12 feet fully extended which wouldn’t work in the middle of the room. I looked online for a taller “A” frame ladder and found one at Home Depot that looked pretty good and had good reviews confirming it’s stability. They of course didn’t have this ladder in stock so I ordered it and shipped it to the store. I would have loved to watch the UPS man deliver our 12 foot ladder though! We knew this would not fit in either of our vehicles so we waited until it arrived and picked it up with the Home Depot truck you can rent by the hour. This is the ladder we bought.

First, we hung plastic along the walls blocking off the openings to other rooms. We also covered the floor in plastic so we could just roll it up and throw it away when we were done. We took our TV down and covered the mount in plastic as well as the ceiling fan. Our family room looked like the site of Dexter’s next kill, didn’t it? 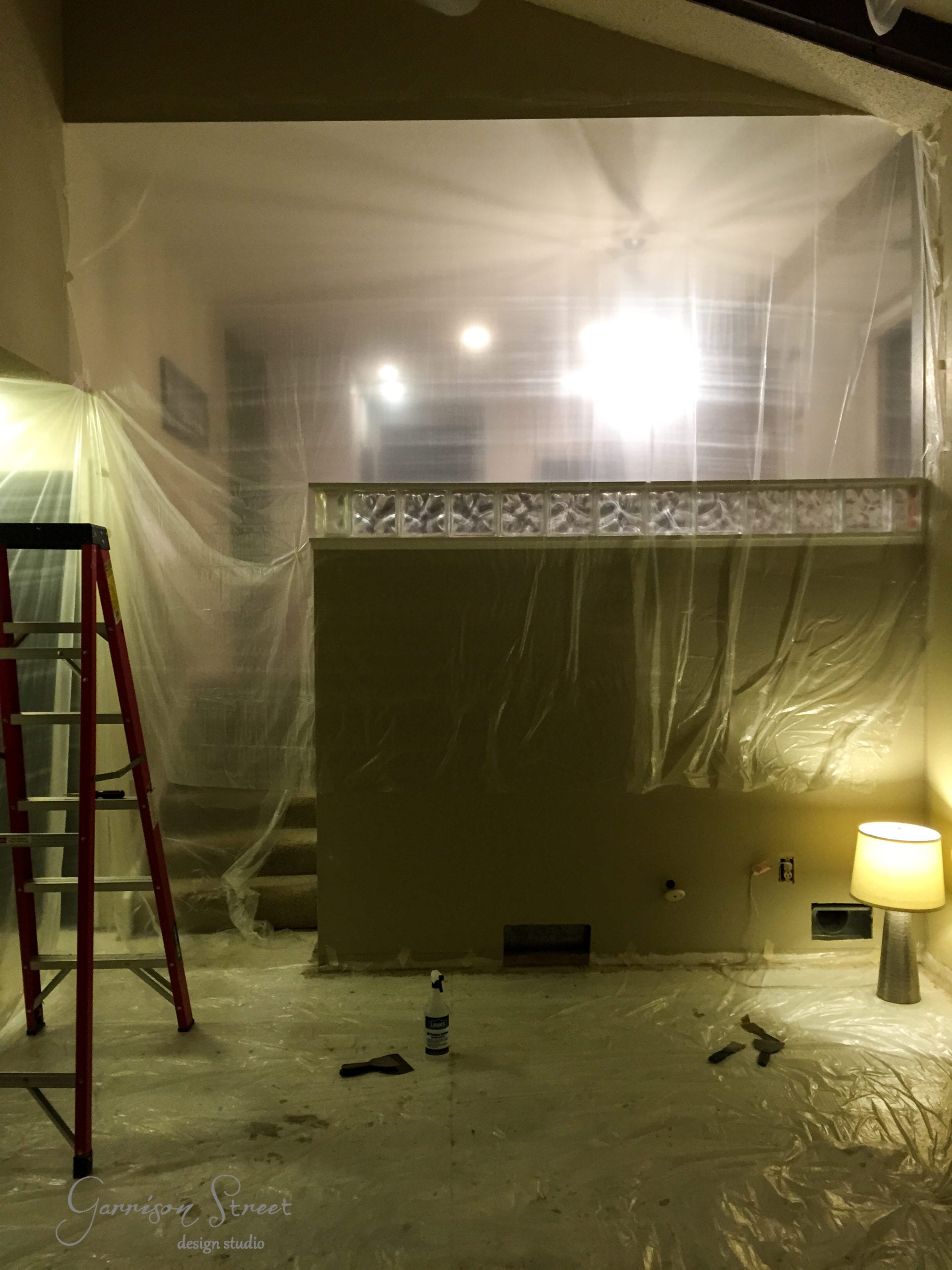 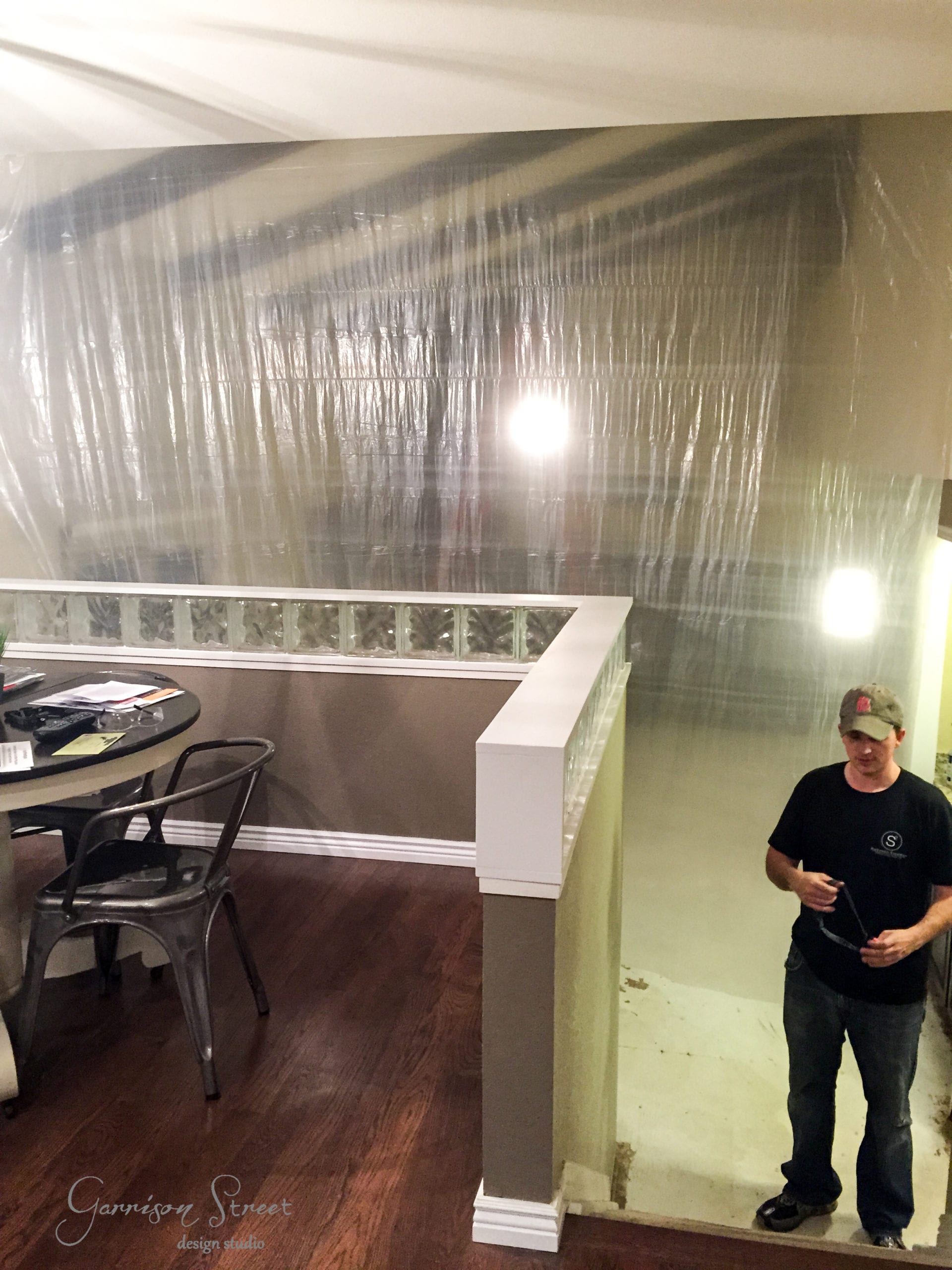 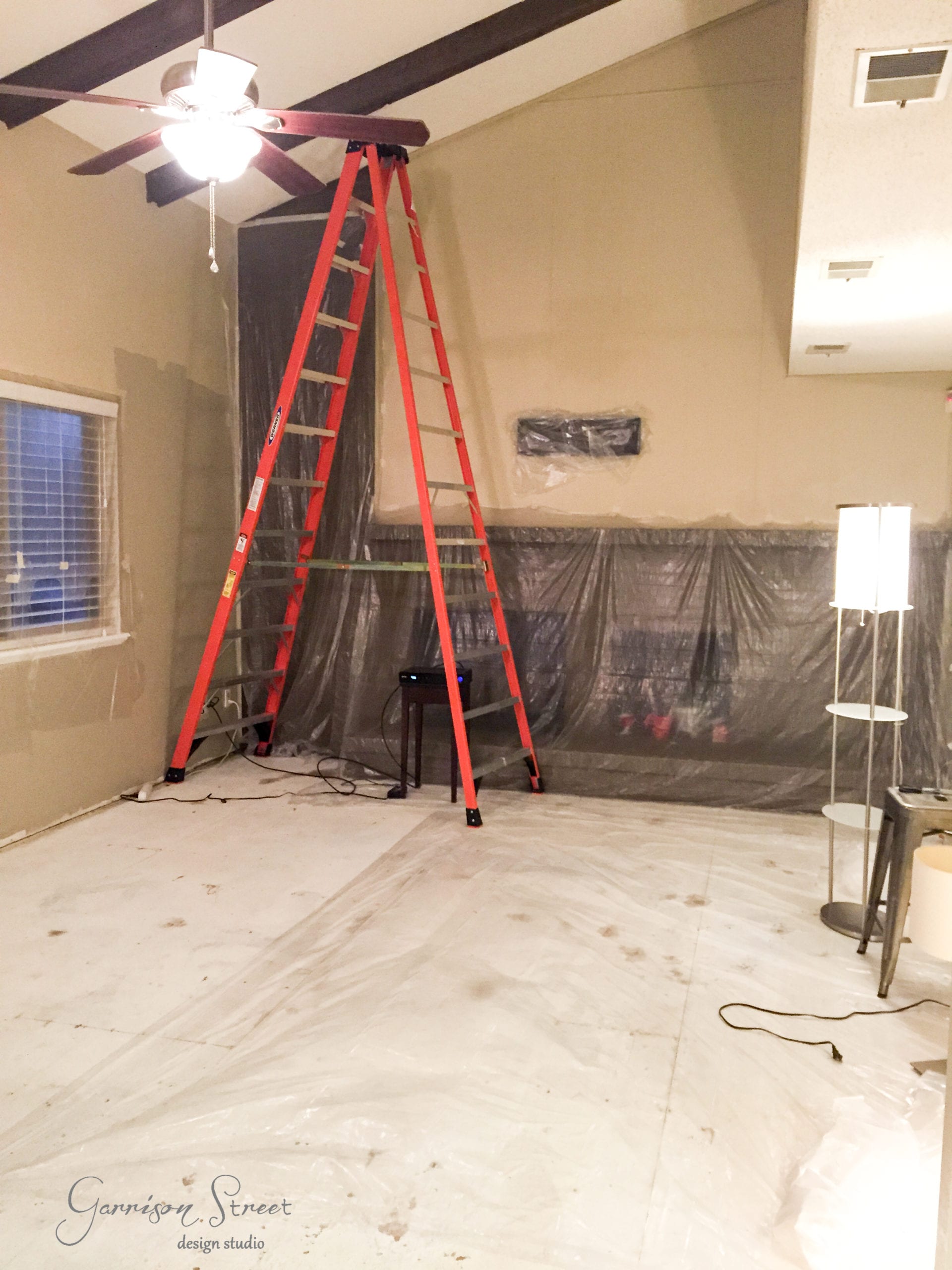 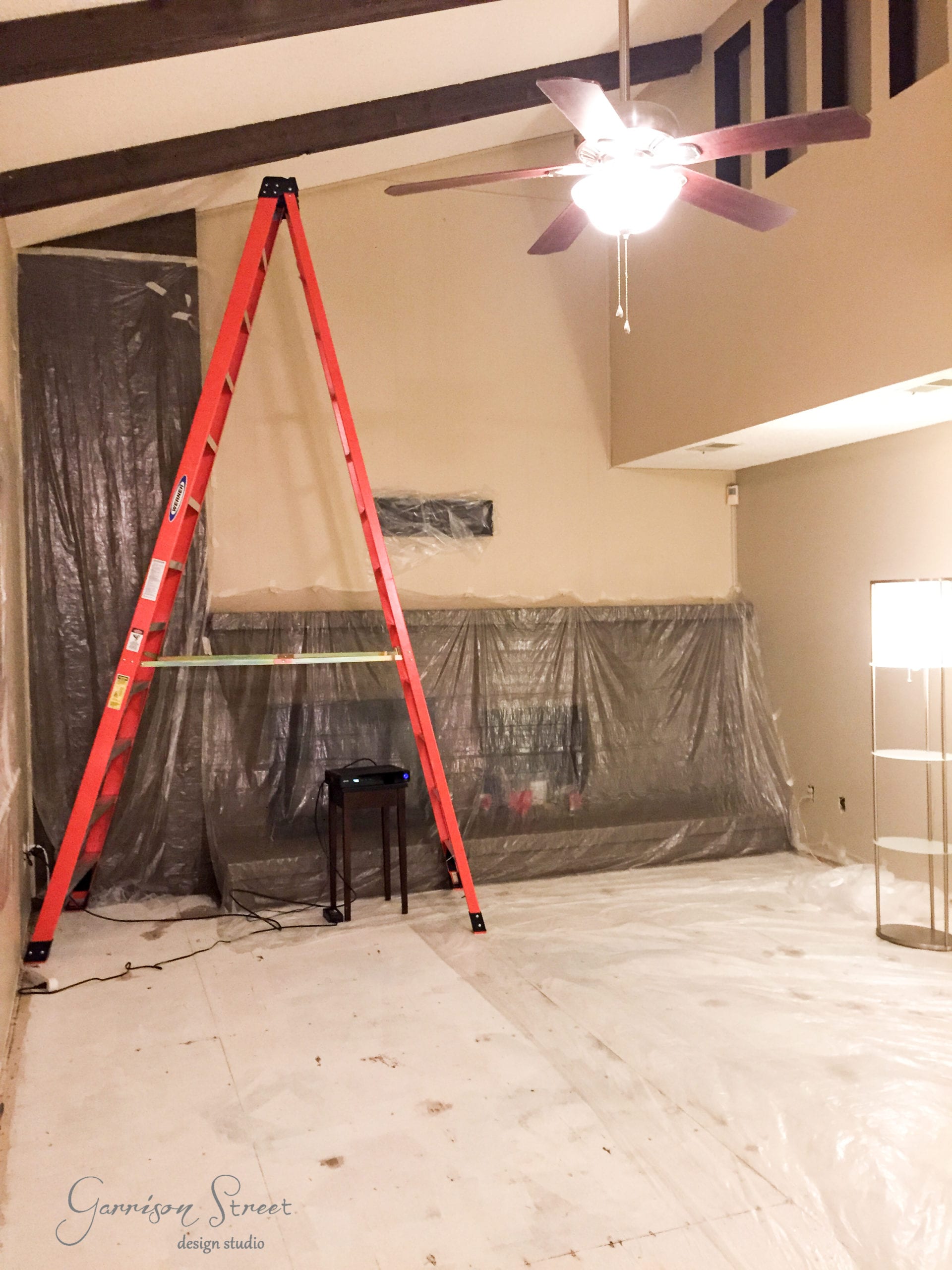 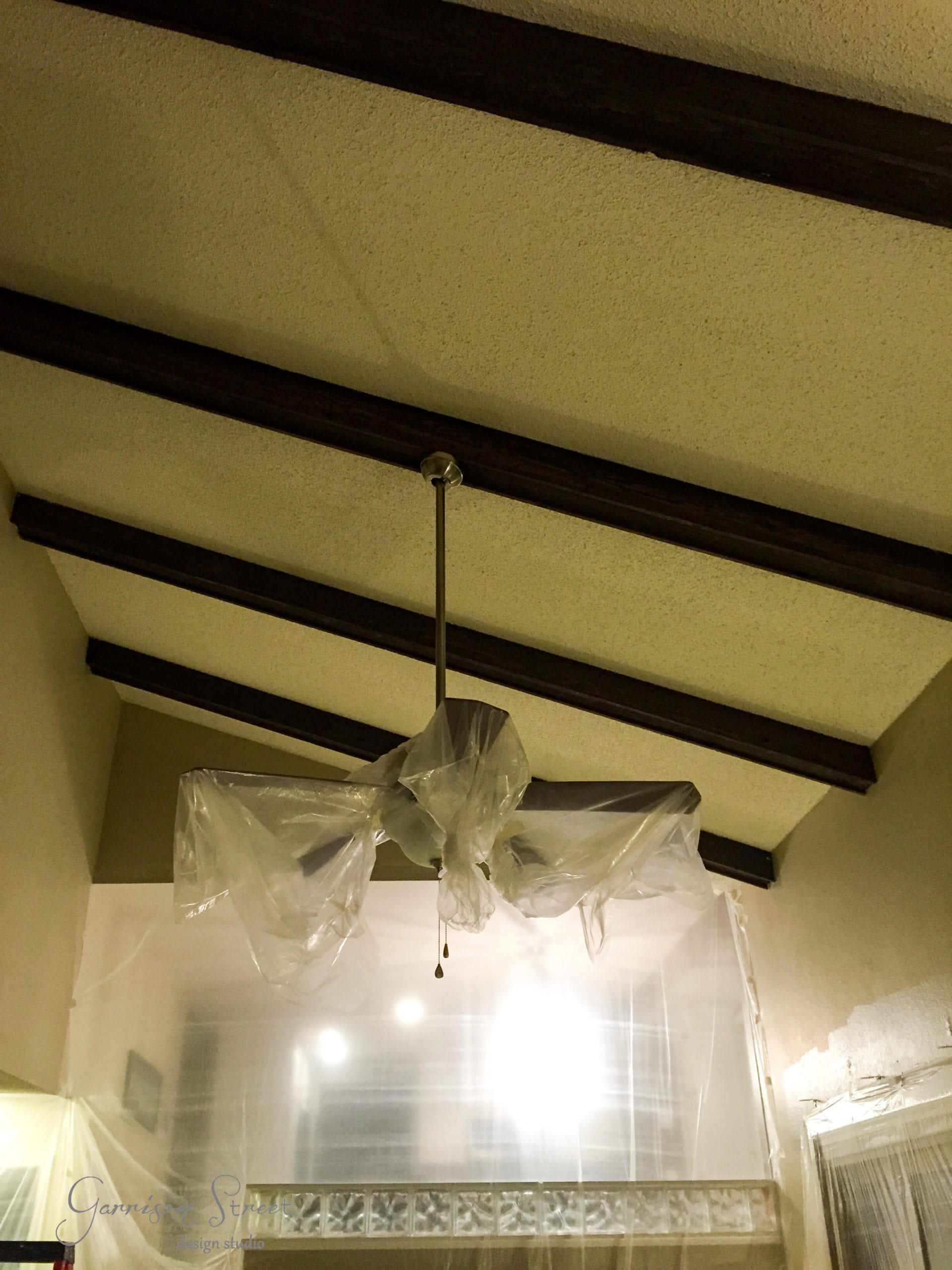 Given that we had only one 12ft ladder, we needed to divide and conquer. Barry used the big ladder to scrape the higher parts and I used the 6 foot ladder to do the lower parts near our bar. We wore masks & goggles and used spray bottles (just water) and plastic scrappers. Once the ceiling was wet enough, it just peeled right off. There were some stubborn parts, but overall I would rather scrape ceilings than remove wall paper any day. It was VERY messy though! It took about a day to scrape all of it but would have been much faster if we could  both work on the taller parts of the ceiling at the same time. Unfortunately, scaffolding was just not in the budget! 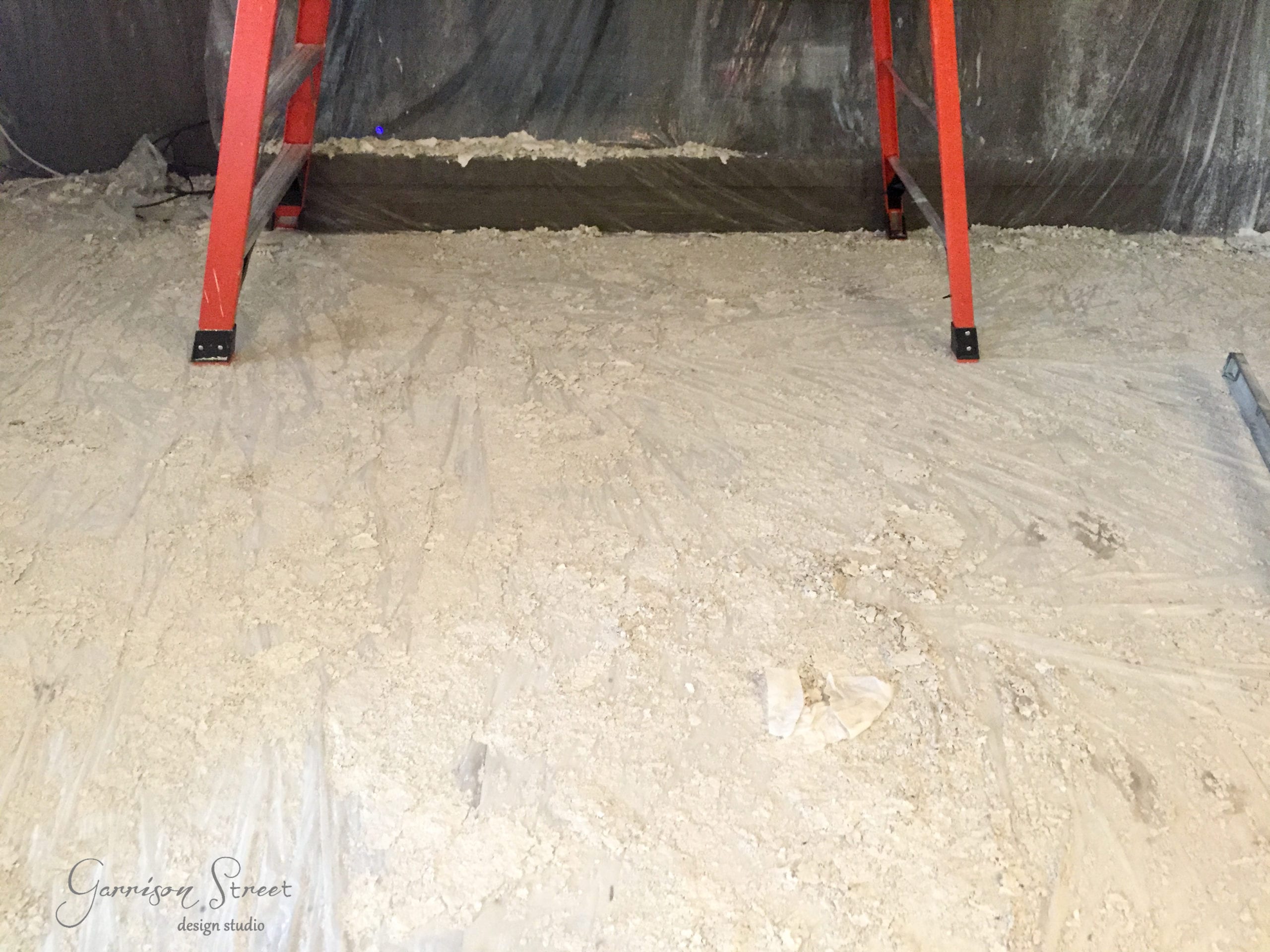 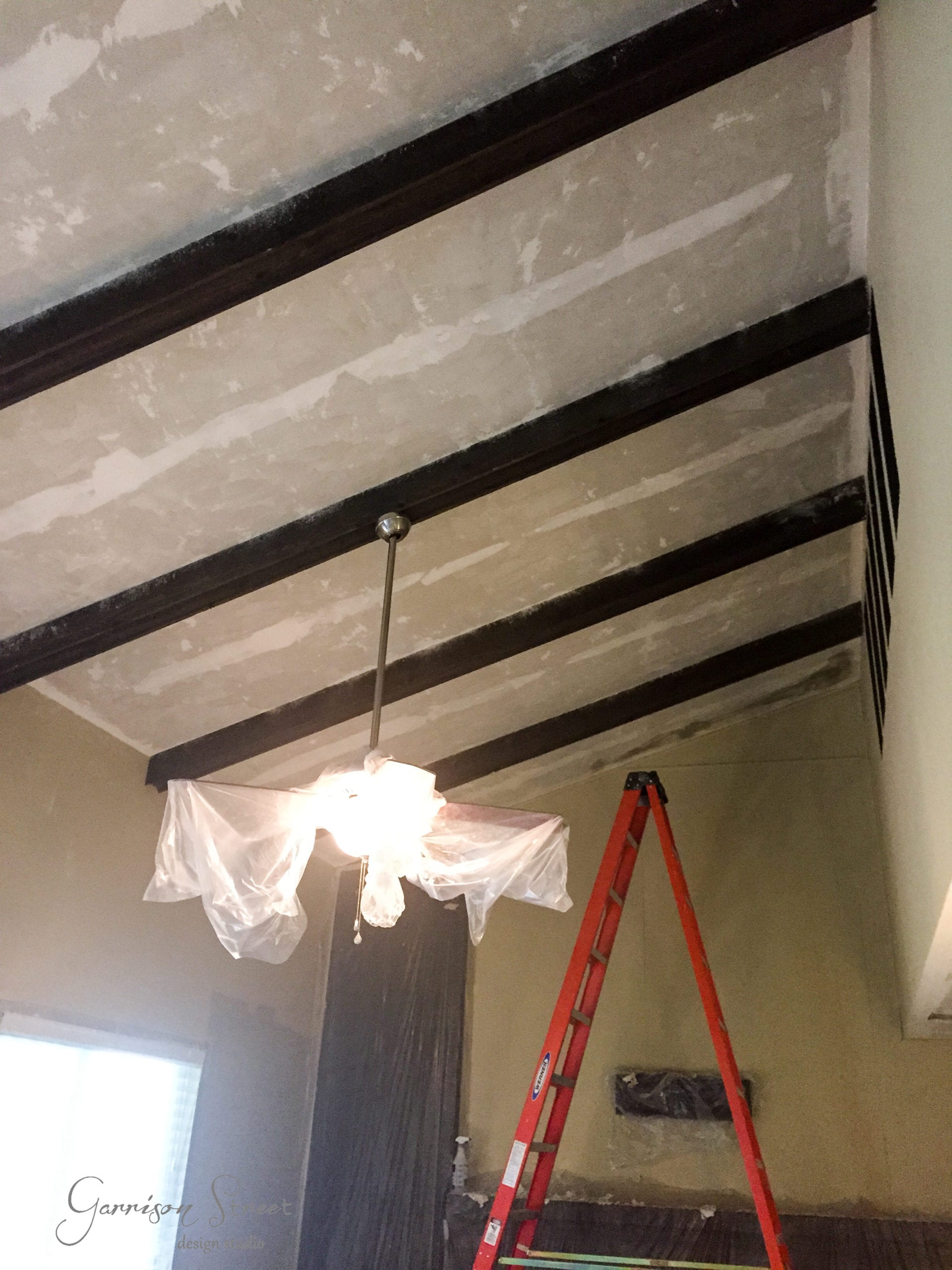 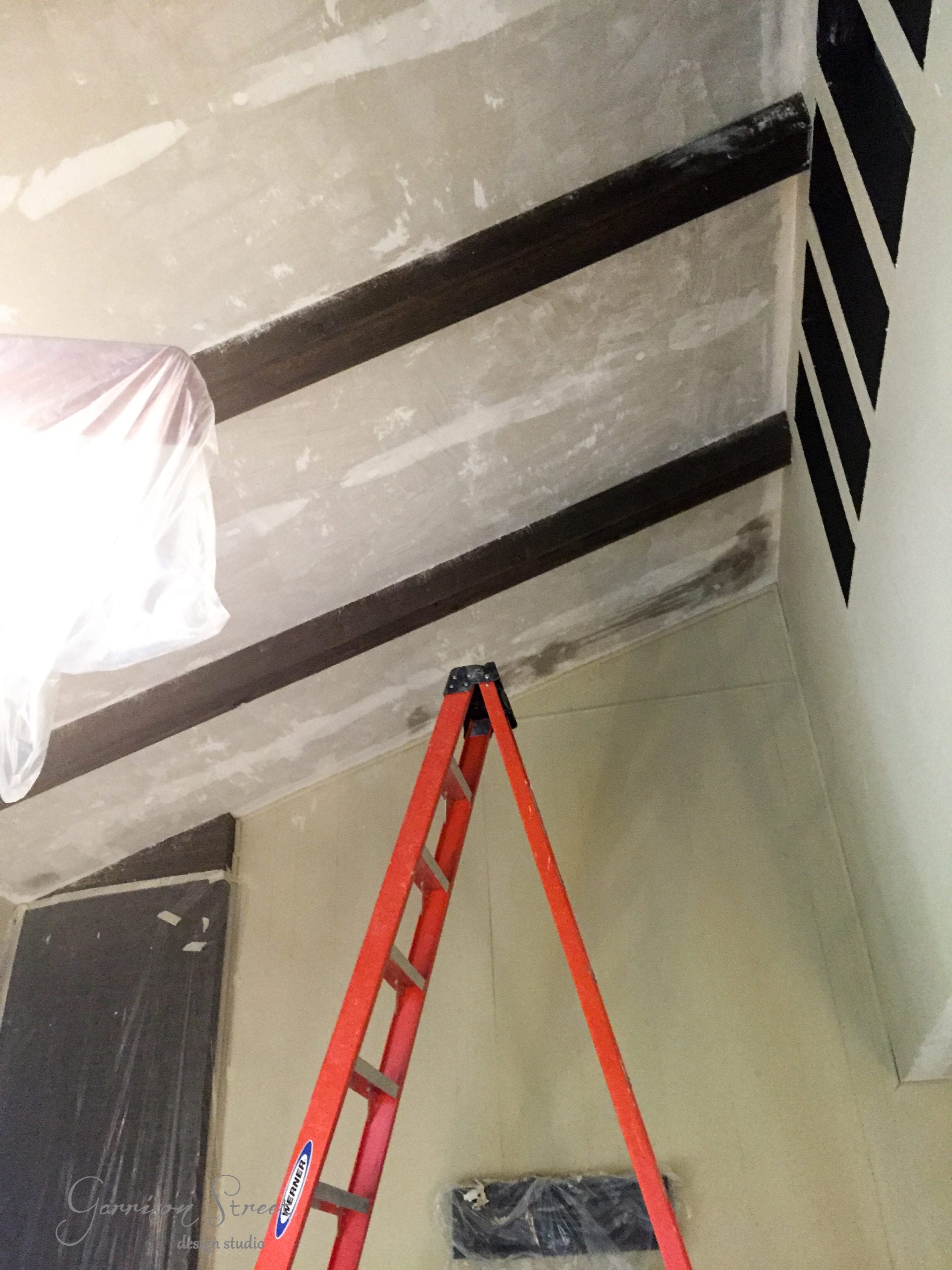 With the ceiling scraped, we needed to patch the parts that were damaged followed by priming and painting the ceiling & the beams. This was time intensive. First we primed the ceiling. Then we painted the beams which were harder because they are very textured. For this we used Valspar’s Deep Earth in a semi gloss finish. Then we edged around the beams with the ceiling paint. I think the best paint to use on the ceiling is the paint that goes on purple (or pink depending on what brand) and dries white. This way you can see what you have already painted. This part went a little faster since Barry could roll the middle sections in between the beams with the roller extender and I could edge on the ladder. I’ll tell you what, if you ever want a good leg exercise, climb a 12 foot ladder about 100 times in a day, its quite effective! Next we had to repaint the walls. I decided to go with a different color for the walls even though what I chose wasn’t drastically different from what it was before. I chose Valspar’s Oregon Coast in a satin finish. Kind of a Grieg if you will. We also painted down the hallway the same color. In all, I think the painting took about a month because we painted the doors and trim as well, but again, we were only working on the weekends and we had an out of state wedding in the middle. I know, we were BUSY! 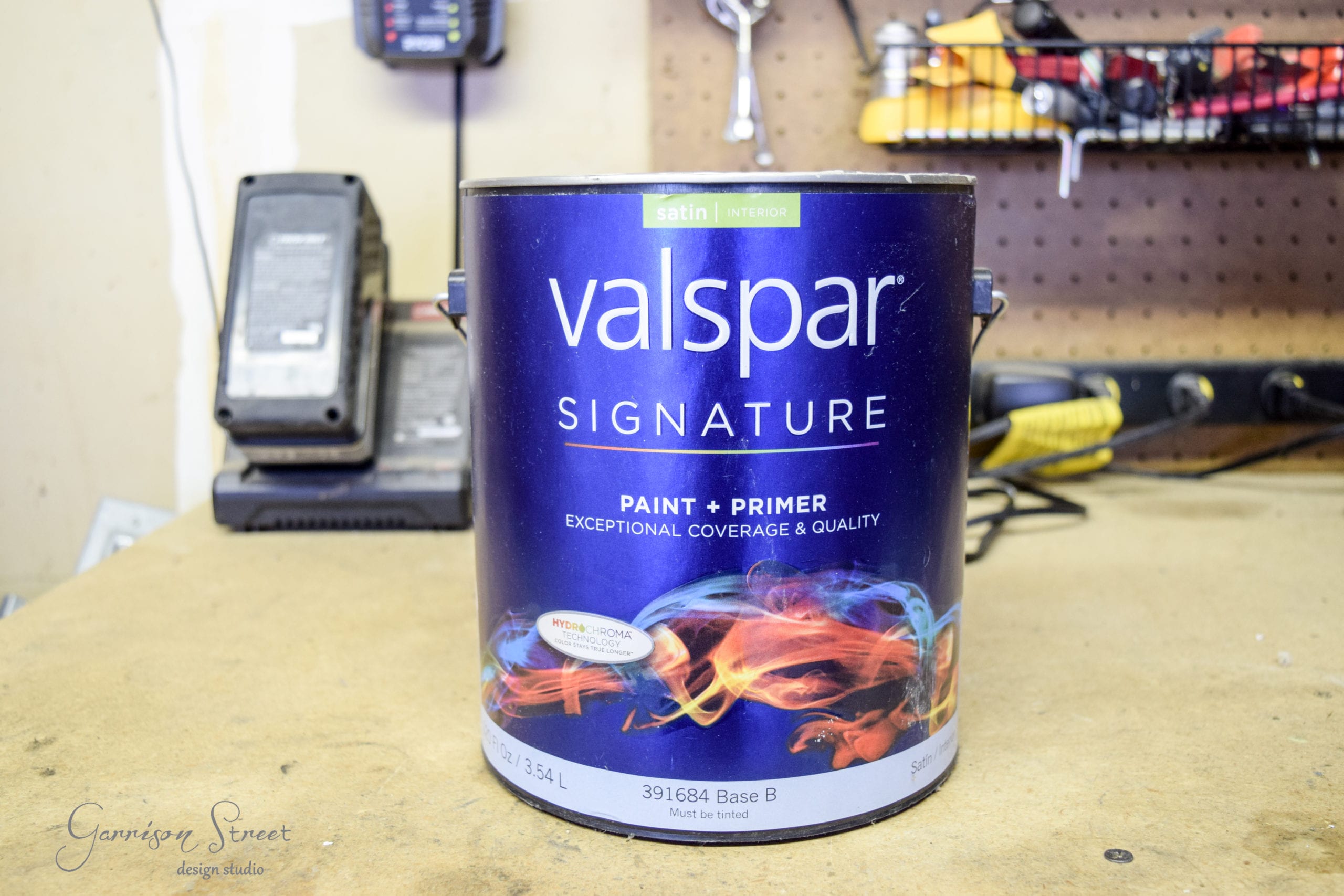 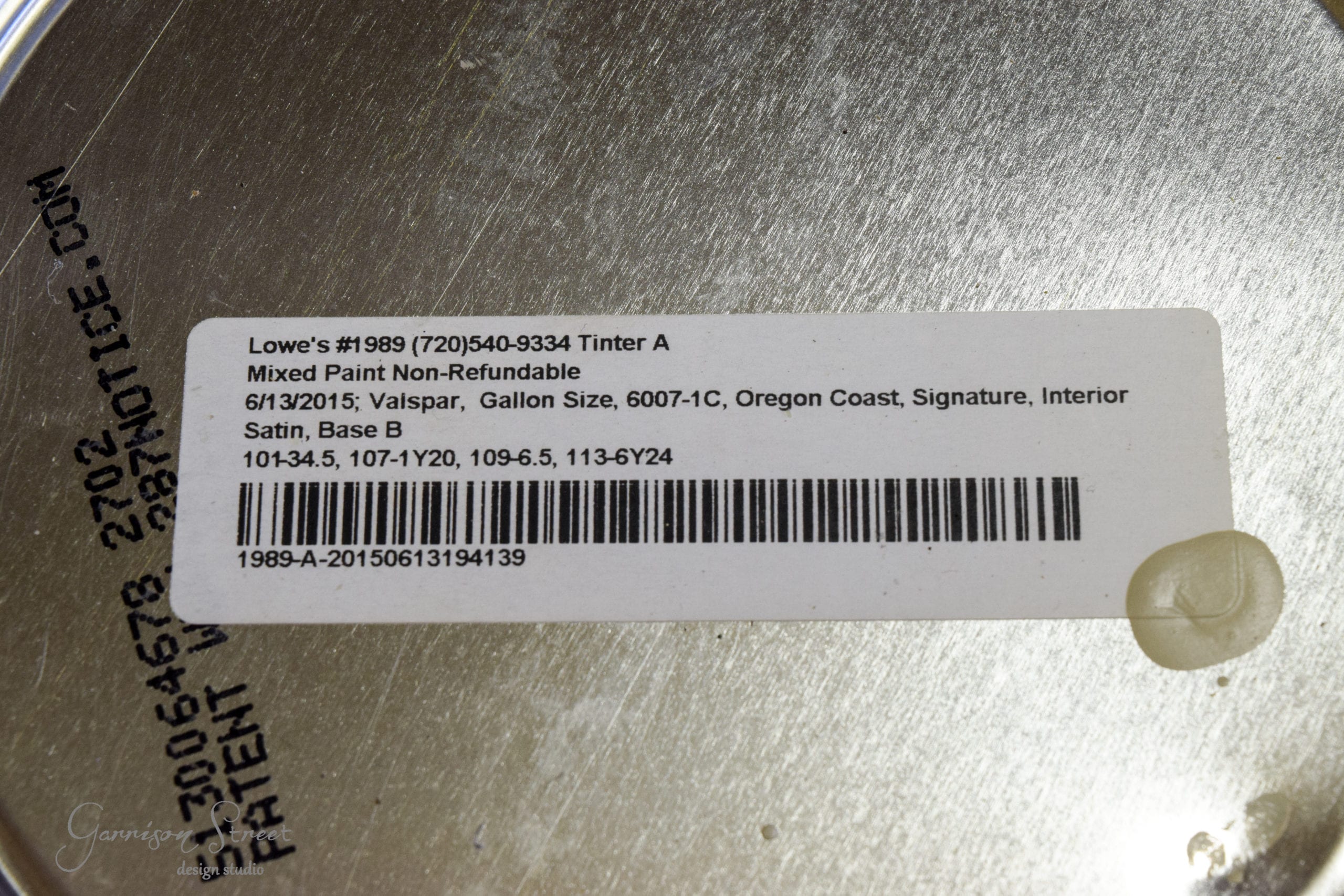 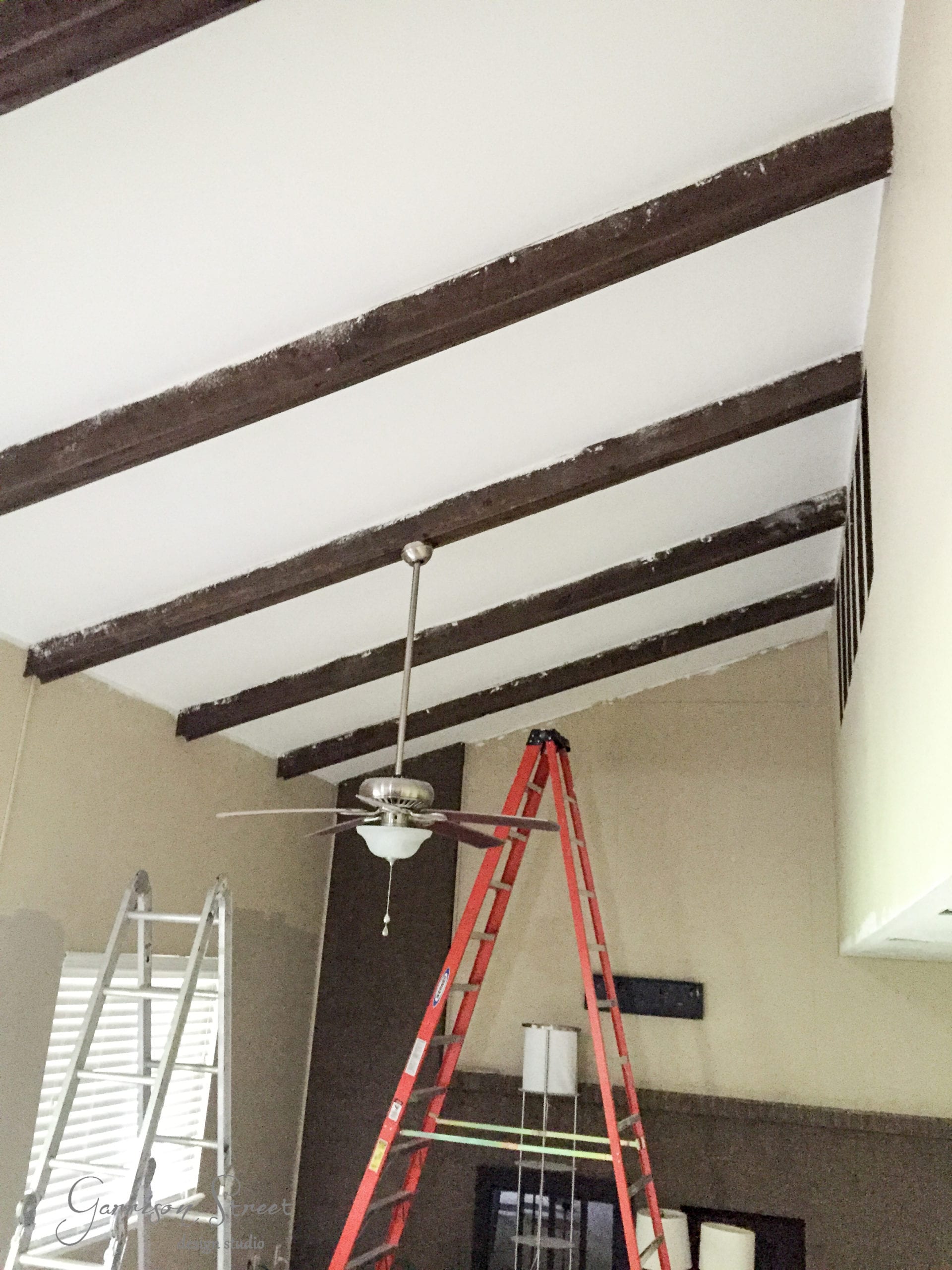 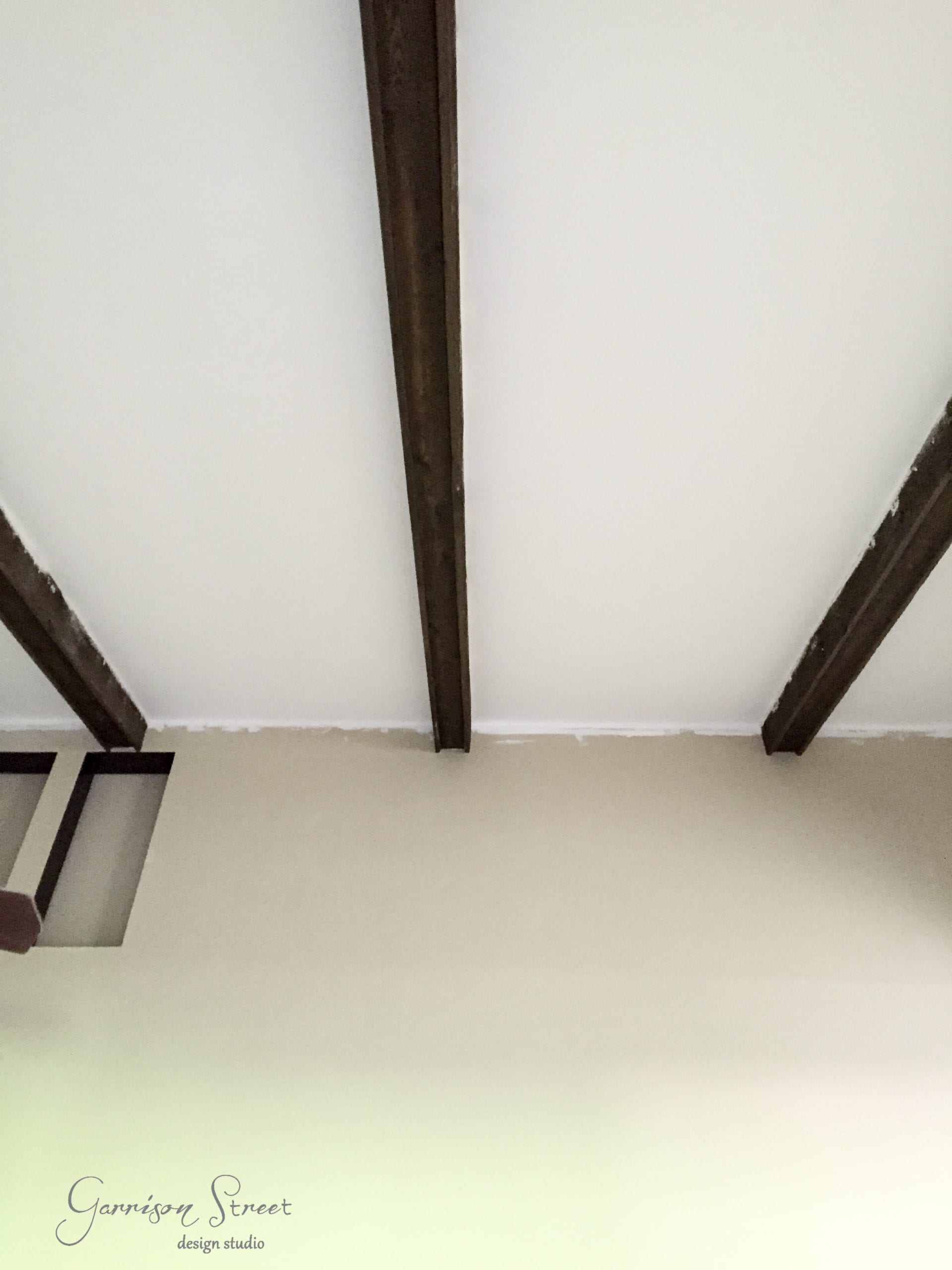 Once we were finished with the ceiling, we installed the laminate wood floors, which you can read about here. And this is what it all looked like once we were done. Much better, huh? 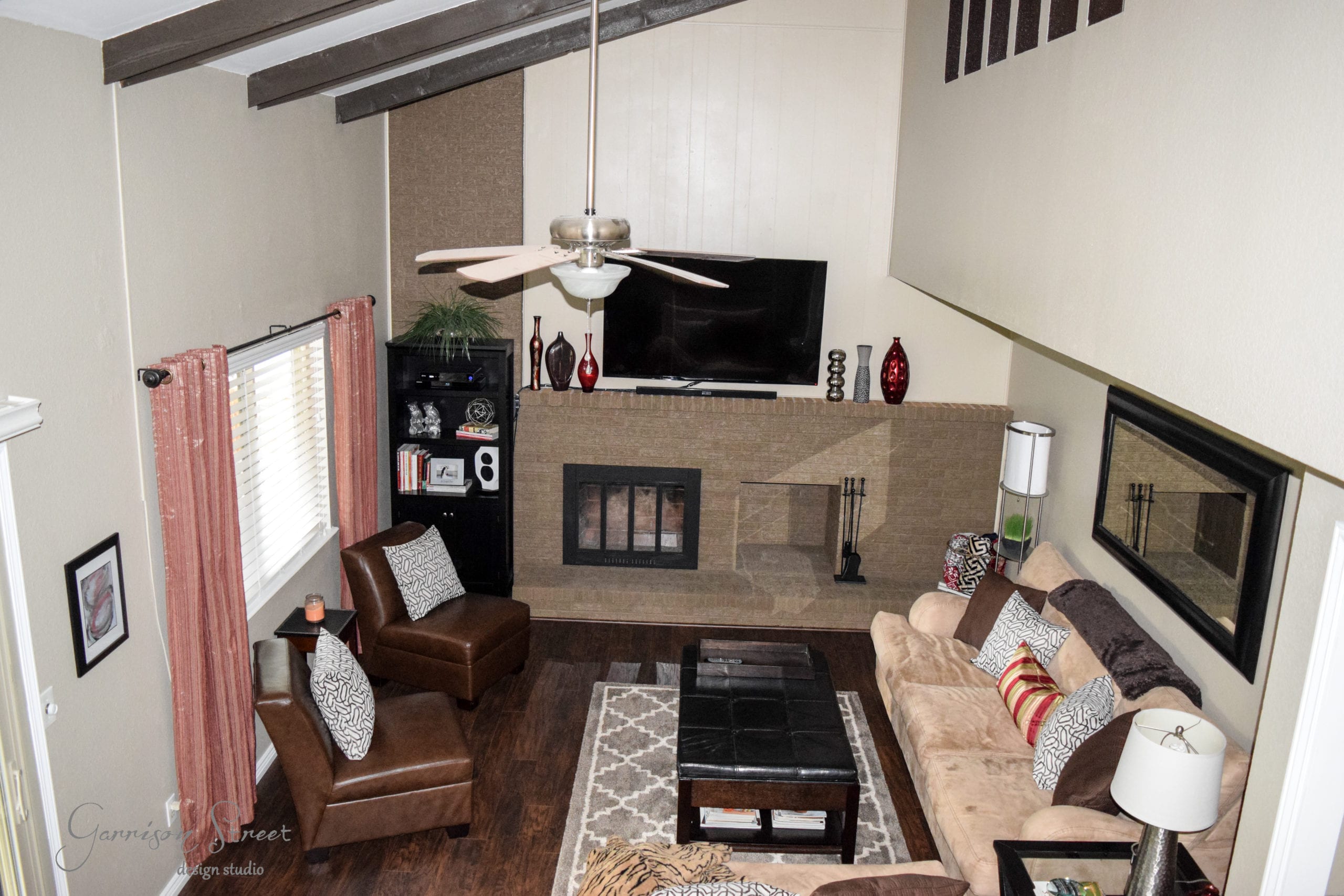 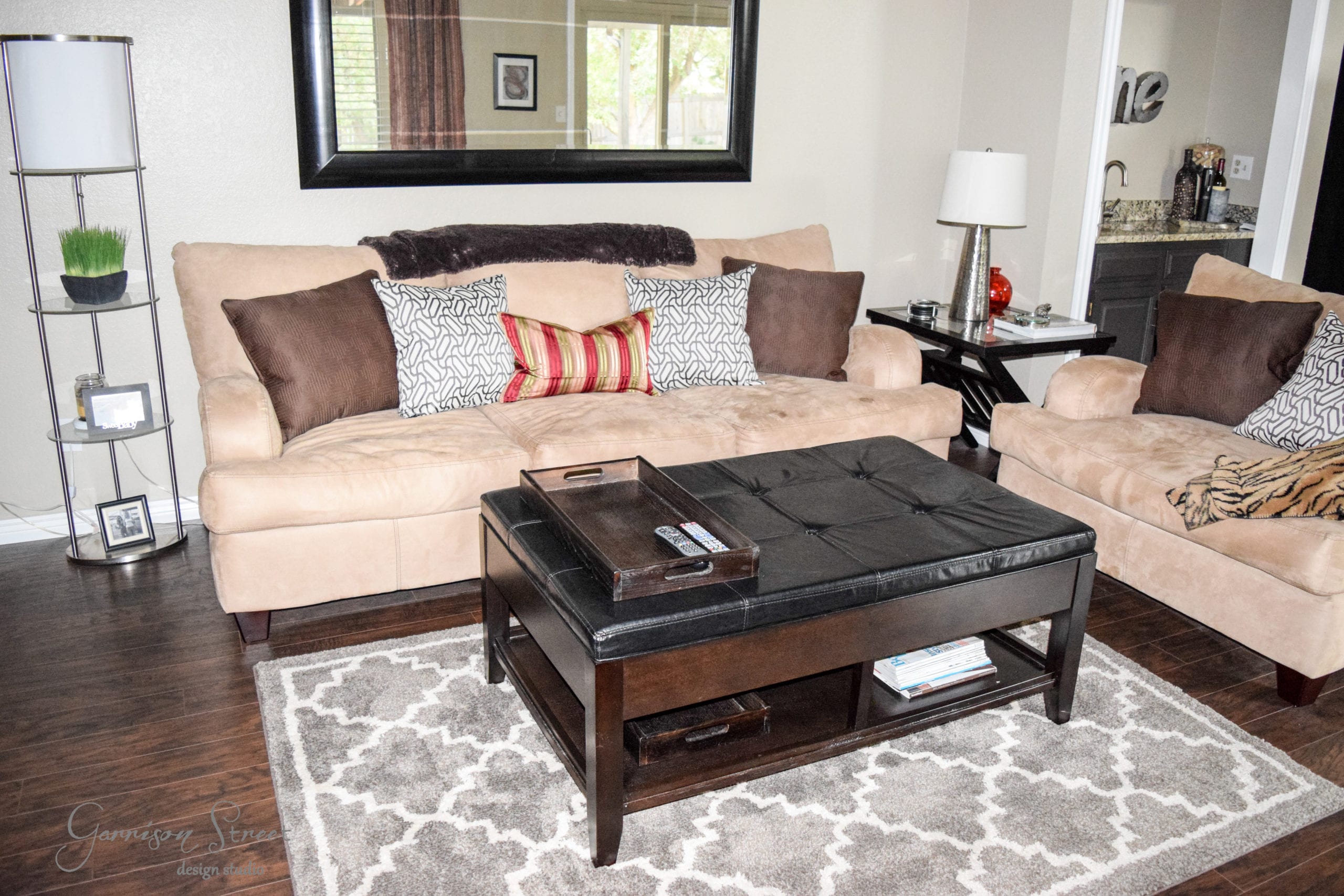 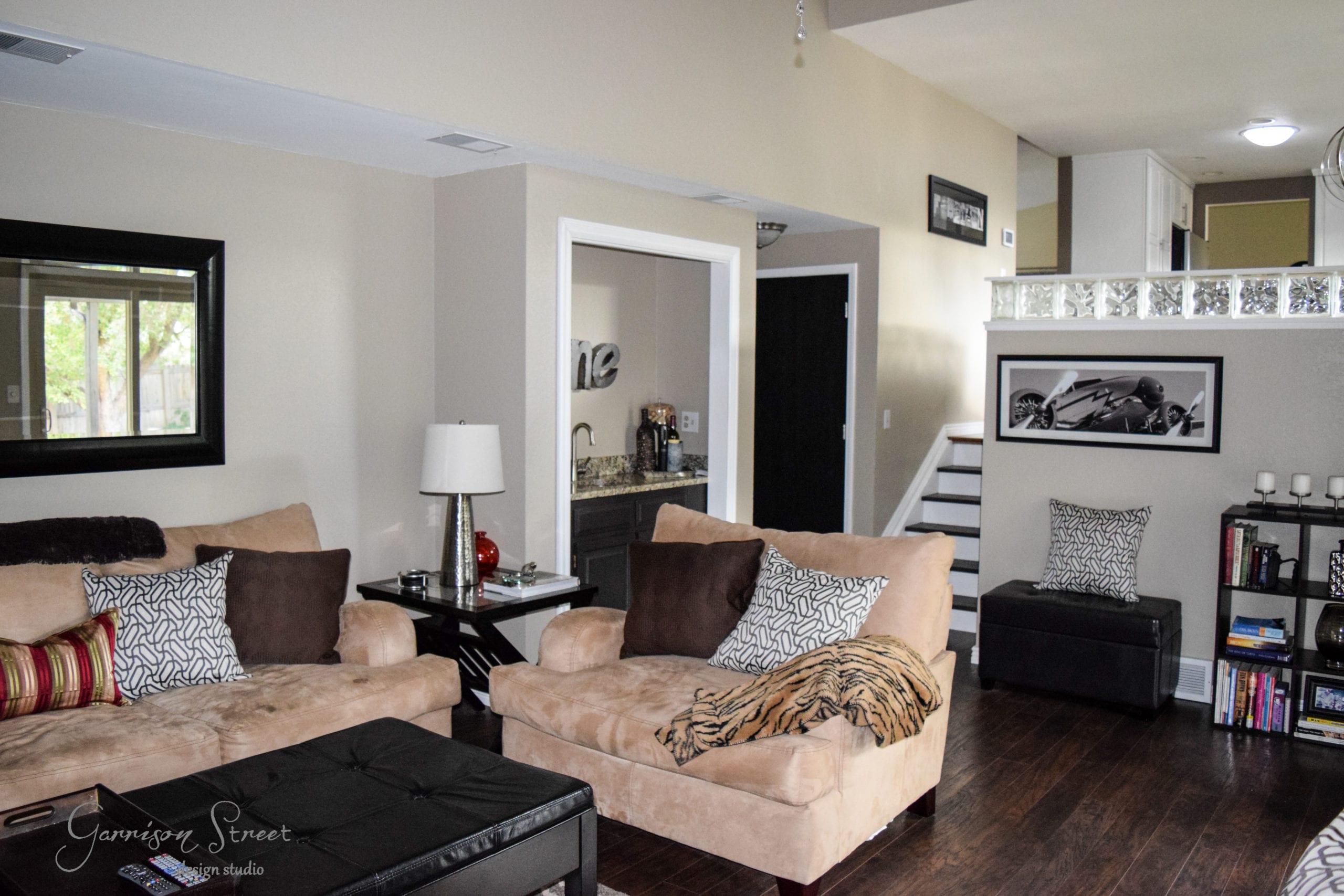