Today I am going to continue with part 3 of Ready, Set, Move in. One of the rooms we decided to add to our already lengthy to do list before we moved in was a mini reno of our half bath that is just down the hall from our family room.I don’t think this bathroom was ever actually in-style……. It was a mix of all decades. It had some pealing nature/botanical inspired wallpaper, some imitation vinyl tile (if you can even call it that) from what I assume was the 70s, and a painted blue vanity with matching blue laminate counter-top fully inspired by the early 90s I have no doubt. It had to go! Really all of it, but we didn’t have time, or the money for a full scale bathroom reno. So this was a lipstick job that would get us by for a few years. Here is what it looked like before. 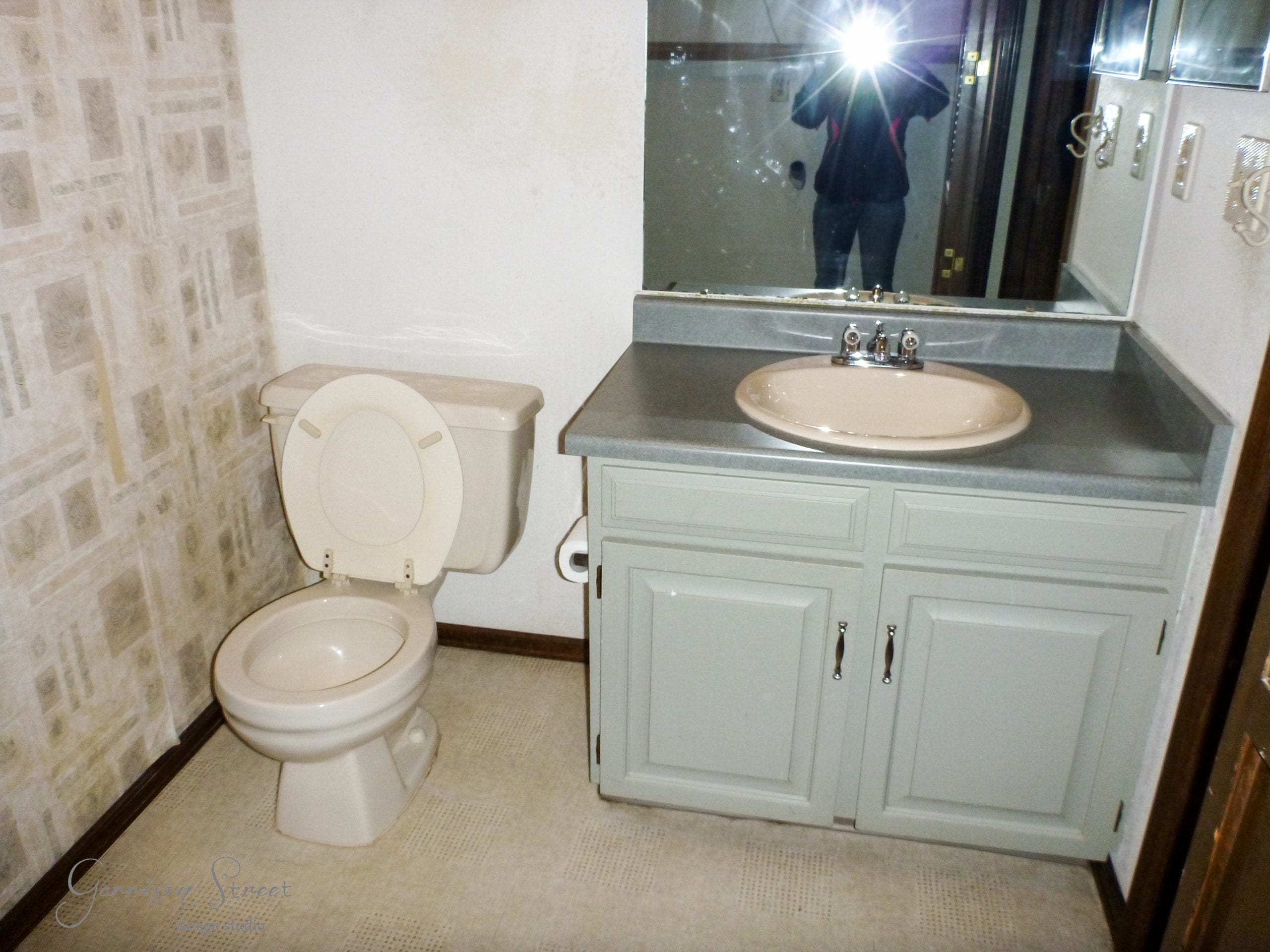 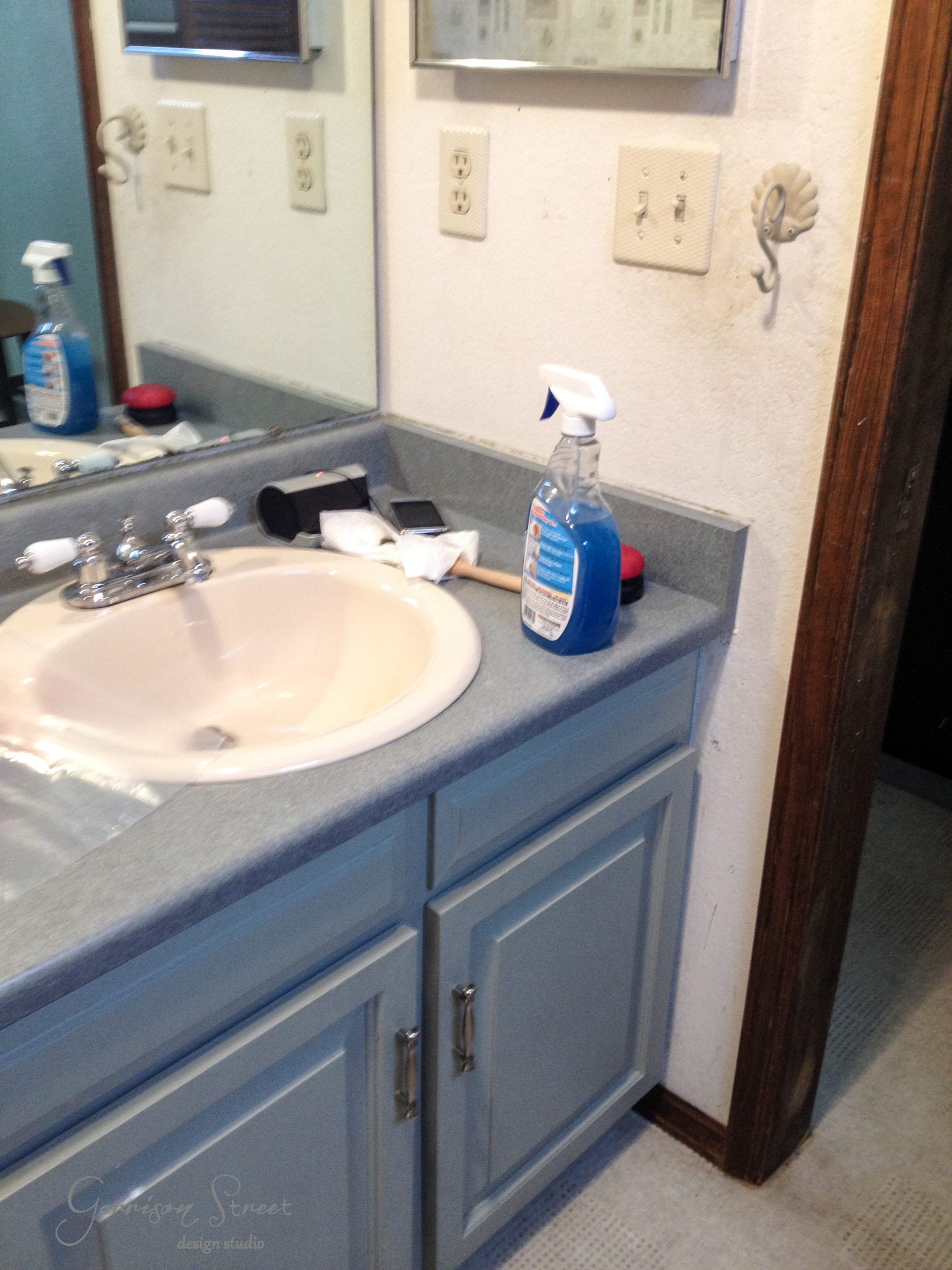 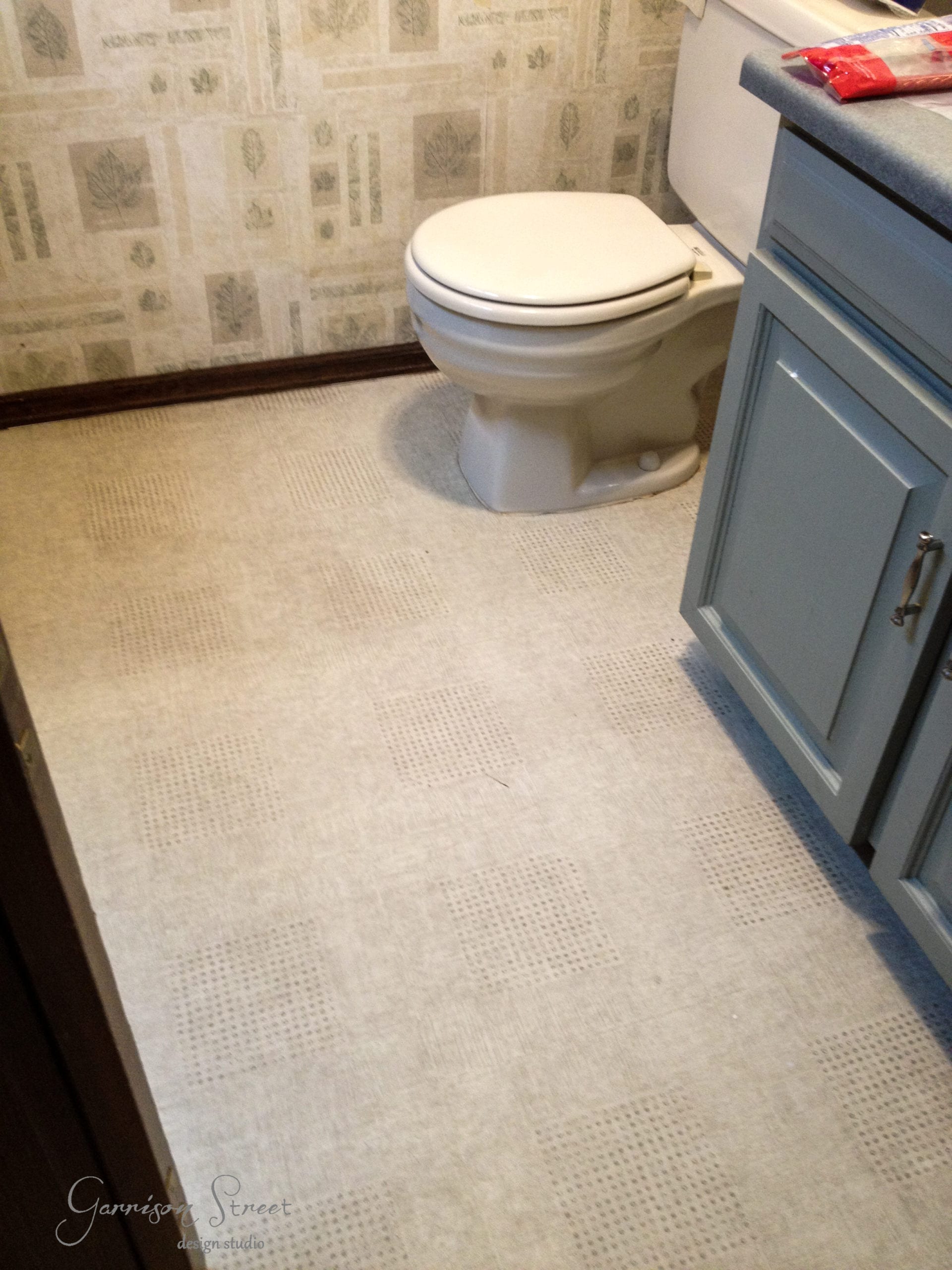 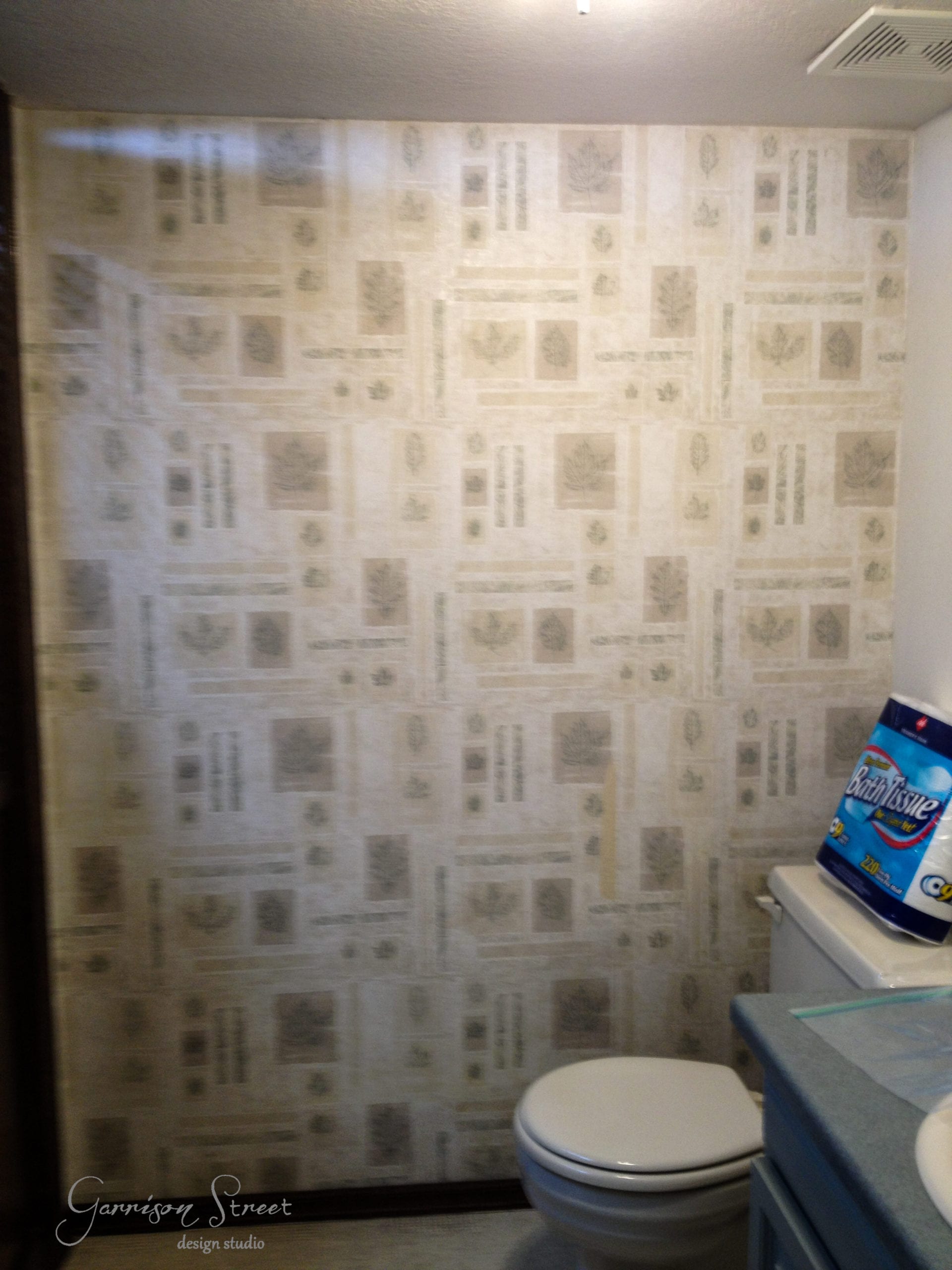 The first thing on the chopping block was that nature wallpaper. Oh how I love removing wallpaper……..can you sense my sarcasm? Luckily, it was only one wall and it wasn’t that big. So we got out the wallpaper removal supplies (yes, we have done this before) and got to work. First, we scored the wallpaper with that little round thing that looks like a cross between an “easy button” and a dish scrubber. Then we sprayed the walls down with Dif, that glorious blue goo that eats the adhesive on the back of the wallpaper. Then we wait. After the Dif took affect we got to work peeling the paper from the walls. It was a competition between Barry and I to see who could peel off the biggest pieces. Ultimately, I think I won but he might protest that. After several hours of peeling and scraping, it was off! Hallelujah! Next was that frame-less mirror above the vanity. I know there are all kinds of ideas out there to dress up one of these, but this one was older than me and it had discoloration……you know like that really old dresser mirror at your grandmas house that you can barely see yourself in? Ok, it wasn’t quite that bad but it was getting there. So we took it down and replaced it with a framed mirror we already had. Now, you guessed it, more painting. For bathrooms, I generally use a semi gloss or a kitchen and bath specific paint. They are easier to clean because of the sheen, but the Kitchen & bath paints ward off mold too. We choose this paint. 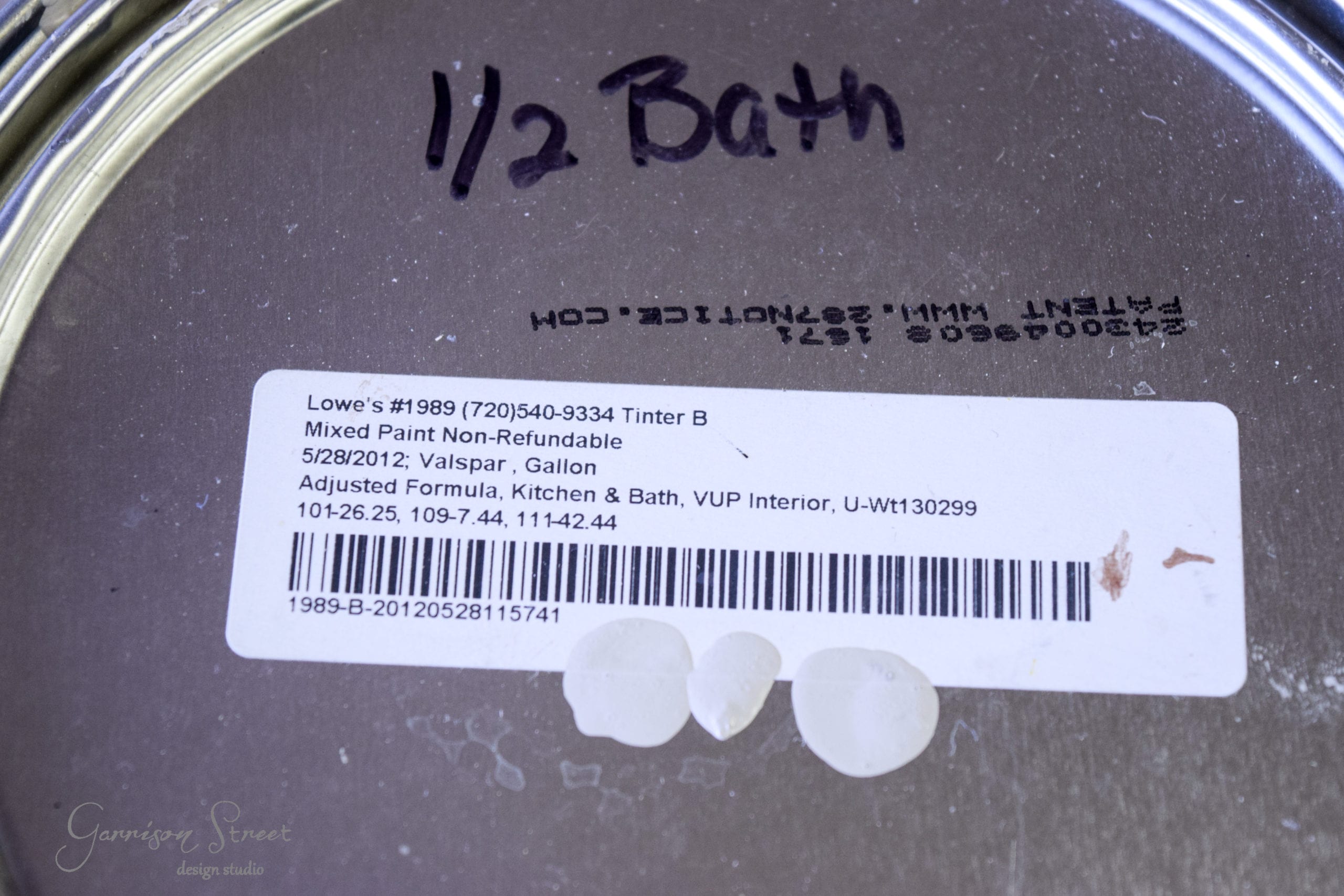 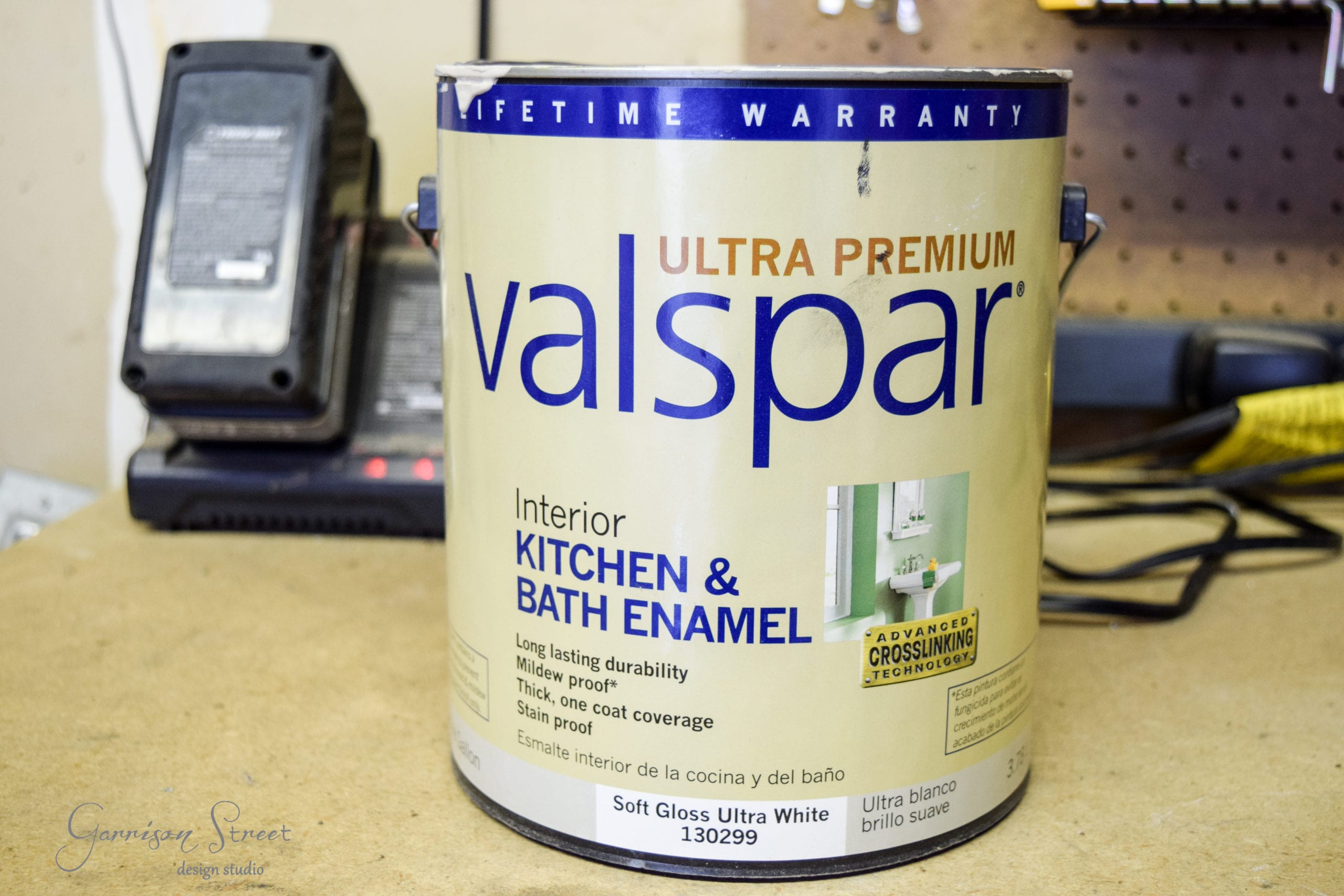 This bathroom really didn’t take that long to paint since it isn’t that big. The only part that really stinks about painting a bathroom is maneuvering behind the toilet. After the painting was done we moved on to the Easter egg blue vanity (part of the reason we added this to the project list). Since my dad was still in town we wanted him to help us with replacing the vanity top and faucet because we had never done any plumbing before. And when I say we, I really mean Barry because I didn’t do this part 🙂 I mean I picked out the new vanity top and faucet but that’s where my “helping” ended. For the vanity top I picked a pre-fabricated granite top from Lowes that already had the sink bowl attached and holes pre-drilled for an eight inch spread faucet. This was an inexpensive solution to the awful counter-top we inherited. 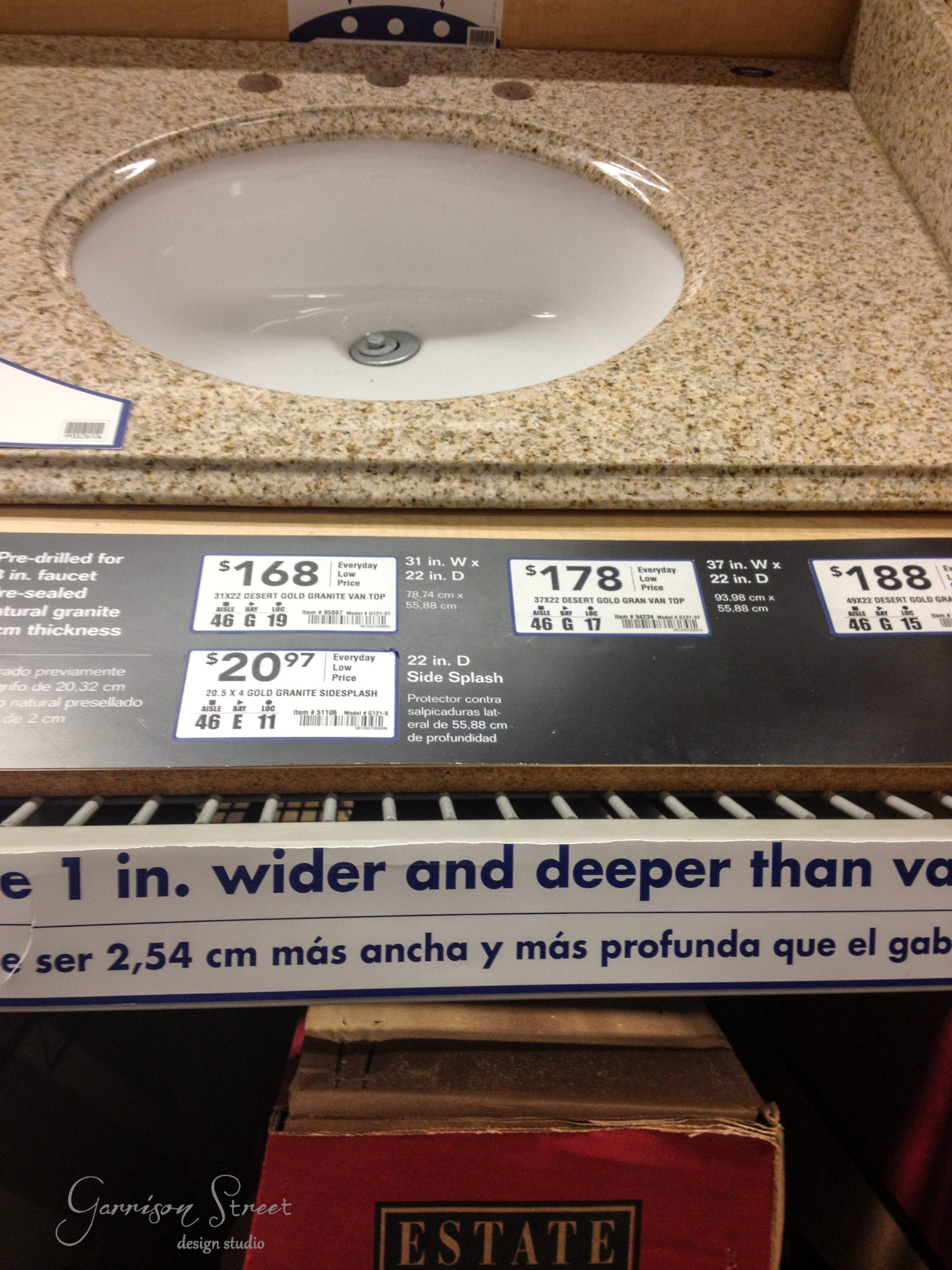 The faucet I picked was brushed nickel, pretty simple and best of all, under $100! Then I had to pick a paint color for the vanity. Since this was just a lipstick job, the vanity wasn’t getting replaced. Besides, we didn’t know if the beautiful vinyl ran under the vanity or if it was installed around it and we didn’t have time to re-do the floors. I chose Sumatra Blend by Valspar in a semi gloss finish for the vanity cabinet and got to work.

Once the paint was dry, my dad and Barry started on the vanity top and faucet. You know how everyone always says you marry your father? Well I TOTALLY did! I didn’t realize it in the beginning, but the more I paired the two of them up and watched them work, the more I realized it! I guess there could be worse things, right? So after some toying with the plumbing, we were all done! What a difference a little bit of paint and a few small changes can make! 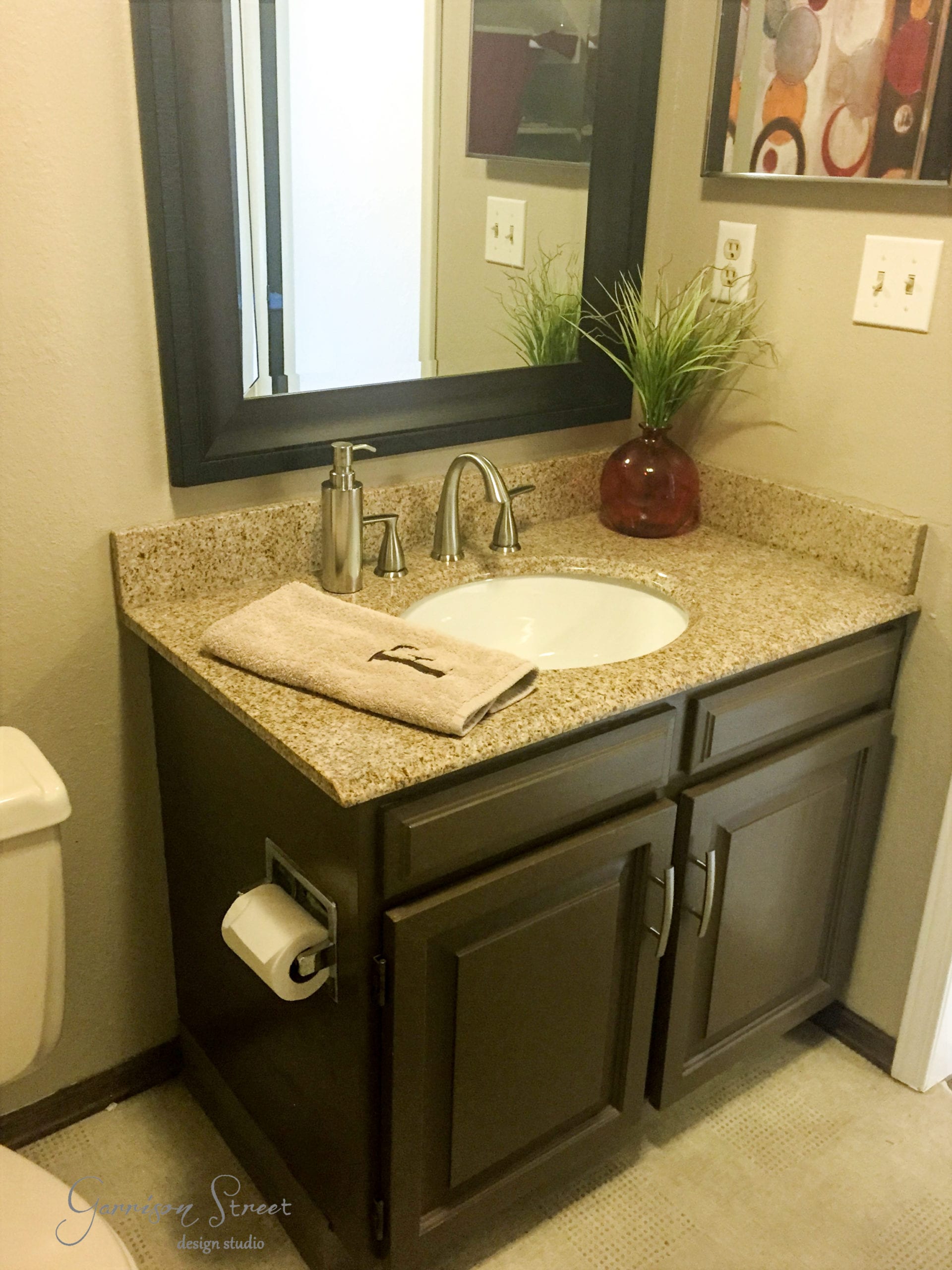 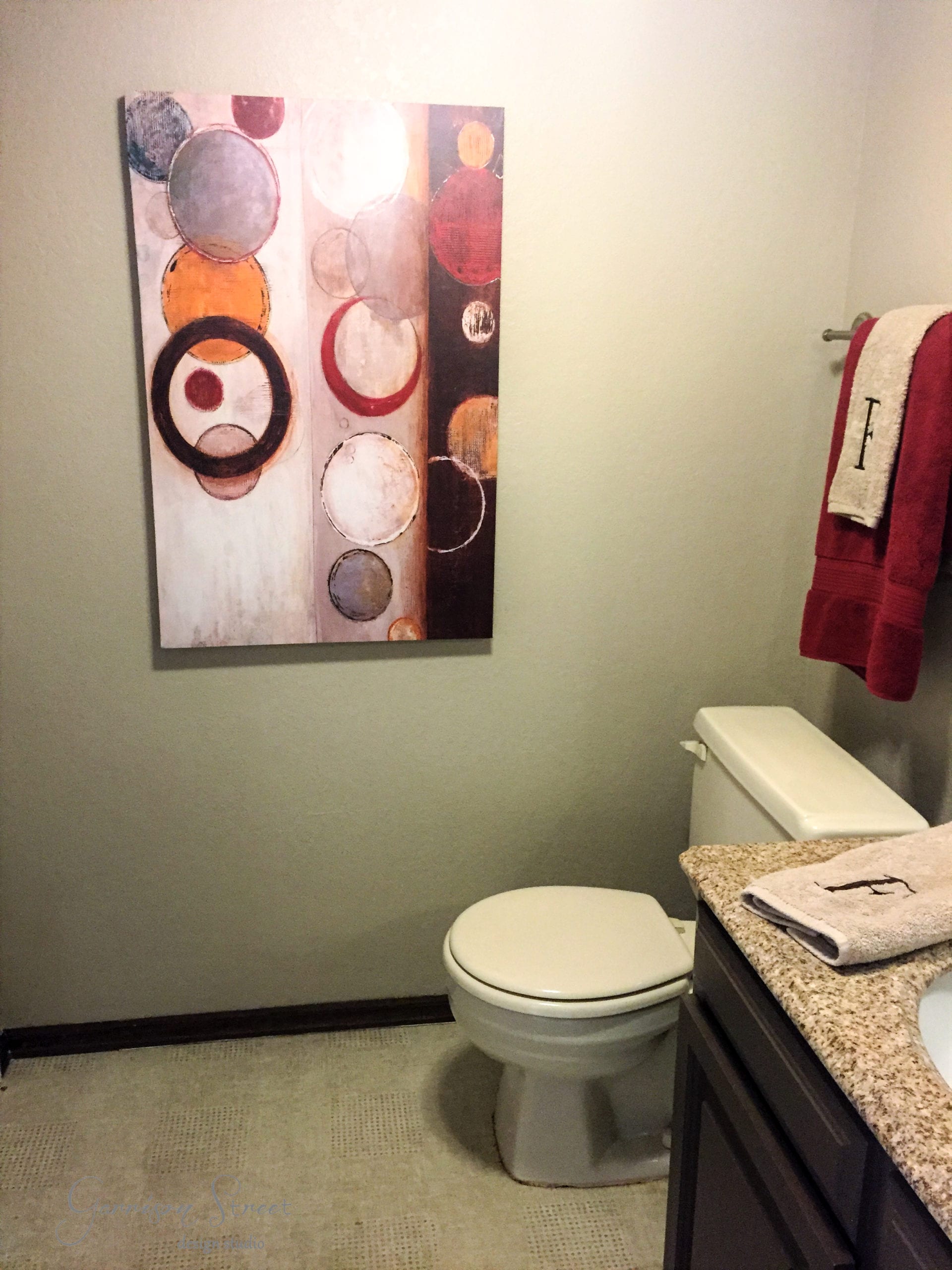 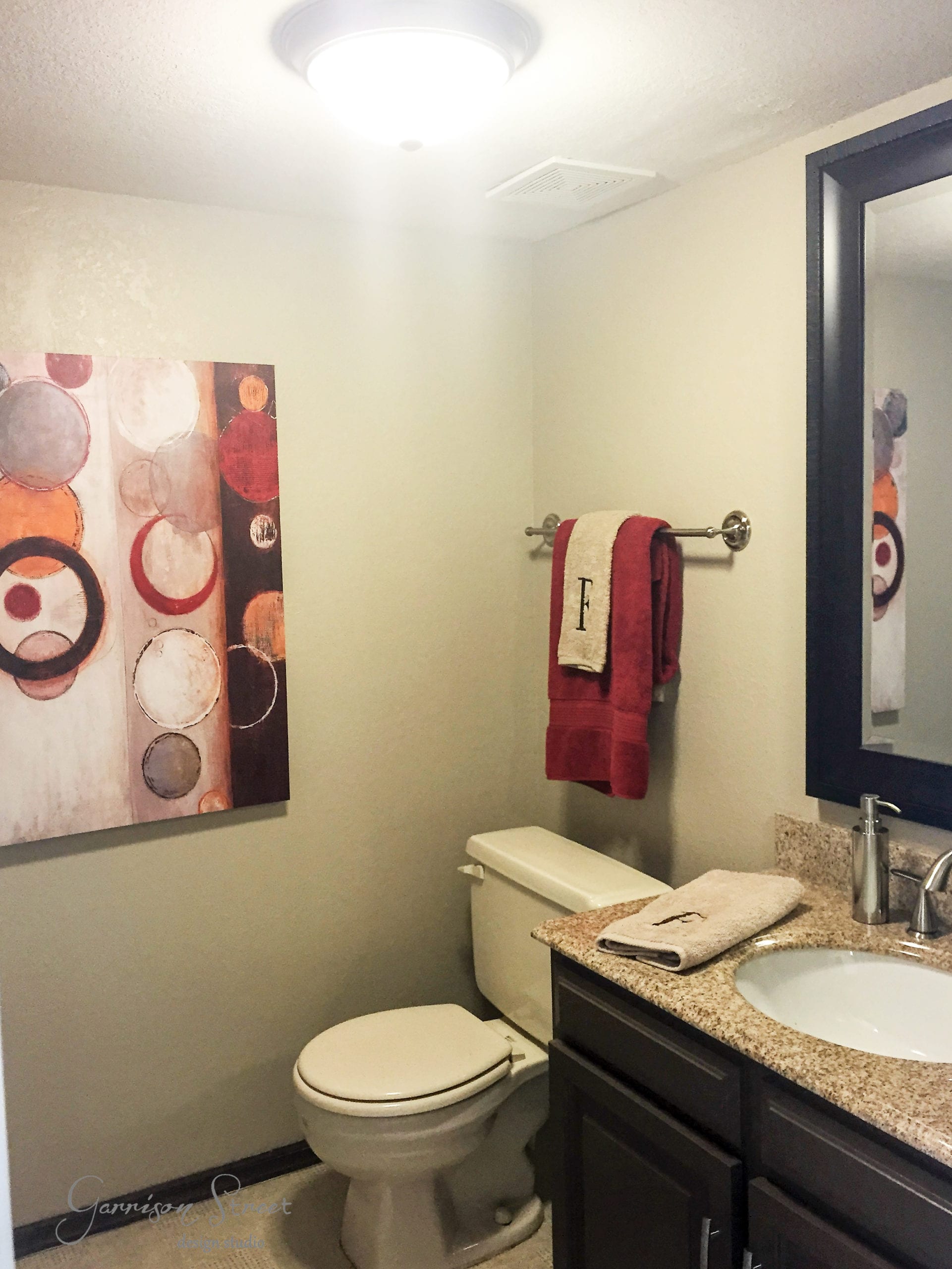